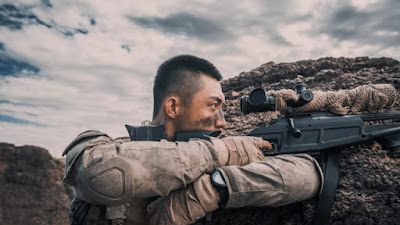 Like the Wolf Warrior franchise, Hong Kong action auteur Dante Lam’s latest Mainland production was largely funded by the PLA and supported with extensive in-kind donations of military hardware. At least in this case, we get their money’s worth. Apparently, the military granted Lam’s every over-the-top request and the results are all up there on the screen when Operation Red Sea plays at the New York Asian Film Festival tomorrow.

Basically, Red Sea is a loose thematic sequel to Lam’s blockbuster, Operation Mekong. This time around, the military takes center stage and the ripped-from-the-headlines story is based on 2015 evacuation of Chinese nationals from Yemen. Refreshingly, there are no western bad guys. Instead, they are Middle Eastern terrorists and Somali pirates (in the prologue). Sure, there is flag-waving, but it is not nearly as distracting as in the Wolf Warrior films.

Given the evacuation plot, Red Sea bears some resemblance to Wolf Warrior 2, but the action scenes, also choreographed by Lam, far exceed anything in Wu Jing’s hit duology. To a large extent, the film is one long action sequence, as one rescue mission begets another and eventually morphs into an operation to recover stolen yellowcake from a mad mullah. If you think that sounds like a criticism, you are sorely mistaken. Lam pulls out all the stops, giving us infiltrations, drone warfare, house-to-house combat, sniper duels, tank battles, helicopter attacks, and hand-to-hand combat during the mother of all dust storms.

Arguably, it is halfway realistic too, since a number of Jiaolong commandos are killed in the line of duty. Frankly, Lam does not spend a lot of time on boring old character development. Jiang Luxia’s Tong Li probably stands out the most, simply because she is a woman (who has no trouble hanging with her male colleagues). Ironically, the most memorable performance comes from Hai Qing, as French-Chinese reporter Xia Nan. Eventually, we learn became so driven to expose terrorists because her husband and young son were murdered in the 7/7 London bombings, which is a nice character development touch.

Red Sea is just a pedal-to-the-medal action movie that constantly doubles, triples, and quadruples down on explosions, mayhem, and blood & guts. In terms of sheer spectacle, it is tough to beat. Alas, Lam pays the piper with a closing shot across the bow basically warning the world better stay out of the South China Sea, if we know what’s good for us, but up until then, it goes down pretty smooth. Highly recommended for action fans, Operation Red Sea play Saturday at the New York Asian Film Festival