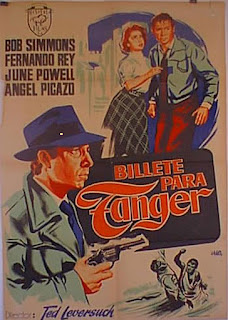 Shot on location as an English financed Spanish production this is a really odd film. The entire cast seems to be dubbed. It looks and feels like the Orson Welles films of the mid-1950's. Simmons leaps around like the heroes in some of the early poverty row like he was  Richard Talmadge in  the 1930's. The whole film seems like it was made in some other time on some other planet. That's not a bad thing rather more a statement that the film has it's own feel.

The plot of the film is nothing particularly special.  It's a story of a type we've seen before. at the same time it can be entertaining even if it is leisurely paced. To be certain the action sequences make this worth seeing, which is enough if you should run a cross it on a rain afternoon.

IMDB lists the film as running  82 minutes but I can't find any reference to the film curently running that long with all prints seeming to be 62.
Posted by Steve Kopian at June 24, 2018