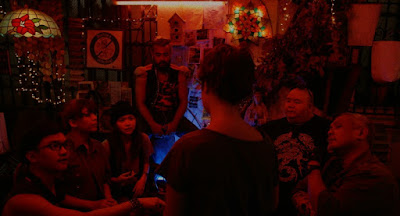 Dean C Marcial has to get a feature film. If he wants to remake and expand his killer short Manila Death Squad that is fine. Equally fine is a new project. Marcial's talent doesn’t bleed off the screen so much as leap off it into our laps. I know it’s only based on one film but holy shit this guy is the real deal.(And to hell with the PR material's quote about homage to Tarantino, Marcial is way more talented and doesn't appear to be lifting from anywhere except his own mind unlike Tarantino)

As for his film- wow. Or more to the point WOW. This 12 minute punch in the face is beautifully acted, eye poppingly shot and wittily written. It tells the story of a reporter trying to get an interview with a death squad leader and it is just one of the coolest things you’ll see all year. From first frame to last it holds your attention and plays your emotions- all of them. And it all feels right.

I love this film a great deal. I love it so much so that I started emailing and tweeting about it as soon as it was done.

If you have any sort of love of film you must see it because Manila Death Squad it the door kick entry of a great talent on the world cinema stage.

The film is staff pick on Vimeo on June 24th so there will be no reason not to see it
Posted by Steve Kopian at June 21, 2018