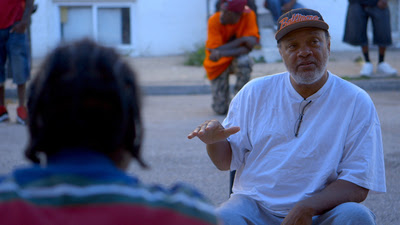 With all the films about the troubles in Baltimore the last thing you’d think we need is another film about them. On the other hand when you have a film like CHARM CITY you suddenly realize that most of the other films are the ones that aren’t needed.

Focusing on one of the poorer neighborhoods in the city the film follows several community activists, a couple of police officers and a city councilman from the area, and all, except one police officer are African American.

There is so much to say abou the film I’m not sure where to start. Perhaps with the glorious sense of place. Rarely in any documentary, have I had the sense of actually being in the place as I did in CHARM CITY. We really are there and we really get a sense of it and the film’s subjects and everyone around them. This is due entirely to director Marilyn Ness who clearly spent a great deal of time with her subjects and in the area. Its clear from watching how events transpire that she was there for the long haul. That may not sound like much but there have been several recent films where the directors really wren’t around their subjects much. But in CHARM CITY Ness seems to be there and capturing it all with the result that the film gets under your skin and moves you

I love that there are no easy answers given other than creating a sense of community to change the mind space. I love how the point is made clear that we need strong people and great leaders because when activist Mr C ends up in the hospital things devolve into bloodshed. People matter.

You’ll forgive the lack of discussion beyond that but there is so much here that I will require a second and third viewing to truly do the film justice. This is a glorious film. Highly recommended.

For tickets and more information go here.
Posted by Steve Kopian at June 19, 2018