What Would Fred Rogers Do? 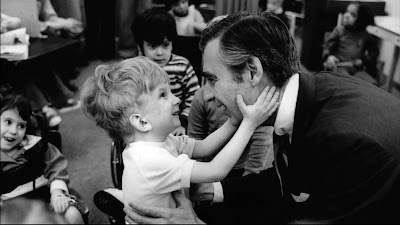 It’s more than a post-viewing icebreaker—it’s perhaps the central question one might ask of Morgan Neville’s smart, engaging, and inevitably touching doc Won’t You Be My Neighbor? : at what point did you cry while watching it?

Or, if you haven’t seen it yet, at what point are you pretty certain you’ll start bawling? I ask that on the chance that, like me, you watched and re-watched the trailer rather obsessively, becoming familiar with the ground covered by the film while perhaps also trying to build up a tolerance to the tear-jerking moments.

I have news for you if the latter is the case: it won’t work. Your face will be wet.

Or maybe not. Maybe you’re the inured-to-raw-emotion-and-sentimentality type; in which case, congrats, and by the way, the doc might still be of enormous value to you for reasons cultural and historical. And if you’re at all interested in children, childhood itself, media, and the place where all these intersect, Won’t You Be My Neighbor? casually offers up some riches. Yet it doesn’t often try to answer questions in these areas explicitly so much as raise them in passing. So despite its touching upon a range of socio-political points, the film is more like an old-style Hollywood biopic than an issue-oriented doc. It’s the story of a great man, pure and simple, with just enough cultural relevance to show why he was great, no more, no less. (You may have heard that Tom Hanks is playing Fred Rogers in an upcoming flick—frankly, I think I’d prefer Paul Muni.)

On second thought, asking when you cried, at what moment, is too easy. It just answers the question in the title of the film with another question. A better, more productive line of inquiry might be: What kind of crying did you engage in? An almost-suppressed roll of a single tear? Fluid, open weeping, perhaps with a smile on your face? Or full-on, noisy “ugly crying”?

Each betrays a relationship to the trigger, and so underneath all of them is a still more fundamental, if obvious, question: why did you cry? And, yeah, here’s the part where I’m going to answer for all of us, sorry: we’re letting the tears flow because of Everything We’ve Lost. And Fred Rogers is the patron saint of precisely that. 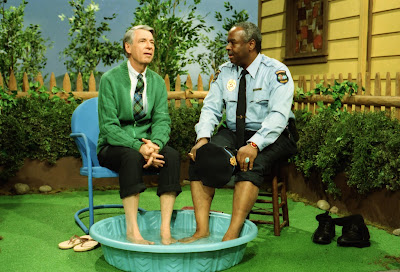 The downside of being the patron saint of anything, however, is that one must be dead. One gets reduced to symbol and song, to chant and relic, to idealization and reification. The living message of the saint—and it can be argued that saints have no message other than the lives they lead—becomes lost in the construction of, to use the phrase in its original meaning, an icon to which we bow our heads. And when more than one generation surrounds and bathes the saint with the sacred aura of Childhood, as we have here, then we run the risk of suffering from acute nostalgia. Maybe even toxic nostalgia. The death of the saint, or (less literally) the death of his or her work, can thus seal the past off from the present in ways that are dramatically and psychologically satisfying but which deny the very gift of spirit that the saint was only too happy to share.

The danger of such cathartic moments, though, is that they can be too powerful, almost unbearable. We go back to watching the moving instead of experiencing it, which is understandable. After all, you still have to pull yourself together and converse coherently with your date in the lobby afterwards. The result is that you end up touched but not moved, to coin a distinction. You get the tears out of your system, and then return to feeling alienated accompanied by all the sound reasons for feeling that way. If the world were just a bit different—that is, more like it used to be—than we ourselves could be differently. We forget that the world has always been in turmoil, although to Mr. Neville’s credit, he does do a good job of capturing the anguish and upheaval of the 1960’s. 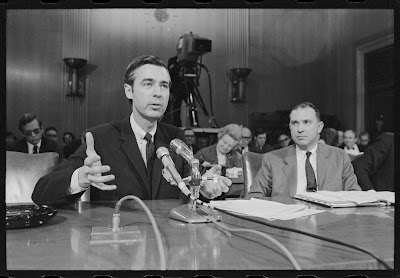 But along with turmoil, today we still have neighbors and neighborhoods. Nowadays we are more apt to use the word “community” instead, but the idea is just as powerful. It pulls us out of ourselves and, if we’re lucky, we become as unself-conscious as Fred Rogers was.

Indeed, this film probably would have embarrassed him. And what if he were aware of the extent to which we’ve made him the universal surrogate for a good neighbor—or, more precisely, someone we aspire to be a good neighbor to? He might feel his mission was not accomplished. That's because all of us still have neighbors, living, breathing ones. In fact, everyone around us who inhales the same air we do—professionally, geographically, culturally, socially—are our neighbors, or could be if we just treated them as such. All it takes is our popping Fred Rogers’s question, and meaning it when we do. Because if we’re not doing that then we’re mourning the loss of the messenger without honoring the message itself.

So please permit me to rephrase the earlier point: we weep during the film not because of everything we’ve lost but because of everything we think we’ve lost; they’re still there, still present, still extant, all those lost things. Your tears are proof of it, as are the tears of thousands of other moviegoers; together, they provide overwhelming confirmation of the presence of, as Rogers would put it, the ability to be loved and to feel capable of loving in turn.