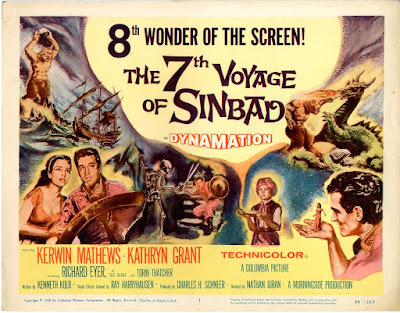 First of the Ray Harryhausen Sinbad films The Seventh Voyage is a great deal of fun.

Blown off course, Sinbad and his crew end up on Colossa, an island full of monsters. They run into the magician Sokurah who is being chased by a cyclops. Fleeing back to their ship they leave Sokurah‘s magic lamp behind. Desperate to get it back he attempts to entice Sinbad to return. When that fails he ends up shrinking a princess thus forcing Sinbad to return him to the island so that she can be restored to full size. After a mutiny filled voyage they return to Colossa where they must fight for their lives.

A grand adventure of the sort they don’t make any more this is a monster lovers delight, Cyclops, snake monsters, dragons, rocs and a living skeleton all figure into the insanity. Its Harryhausen working near the top of his game and it’s a blast and a half.

Does it make pefect sense? Oh hell no, but it moves so fast you won’t care.