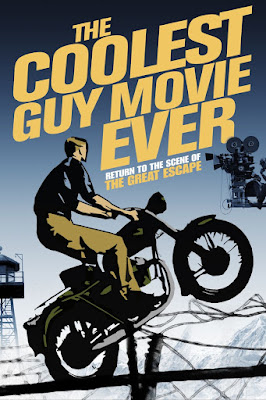 THE COOLEST GUY MOVIE EVER is a loving tribute to THE GREAT ESCAPE. It is a modern day travelogue of a bunch of fans who travel around Germany looking for the places where the movie was shot. As they travel across the continent are treated to all sorts of stories that might not ever come up in a traditional making of . For example one of the people who lived in the apartments where the stars stayed tell us stories about what they were like after hours. Its an absolute blast and a half for anyone who loves the film.

I don’t know what to say. If you love THE GREAT ESCAPE, you’re going to love the documentary. It’s the sort of thing that has me wanting to go back to see the things in the film that I never noticed before. For example the fact that in many shots the Nazis who chase Steve McQueen on the motorcycles are Steve McQueen. He had to double them because the champion riders hired to place the part couldn’t keep up with him.

I loved the film. I had an absolute blast watching it each of the four times I watched it.

Highly recommended The Coolest Guy Film hits VOD on August 21 and should be double featured with THE GREAT ESCAPE.
Posted by Steve Kopian at August 17, 2018