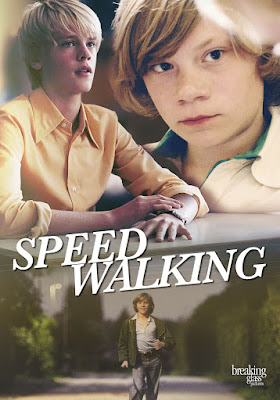 For those in the US the sport of speed walking looks and sounds silly, with the odd gait and the fact its really not walking nor running hard for some minds to grasp. For 14 year old Martin it’s the sport he loves and he’s very good at it. That’s a good thing because Martin’s life is about to get weird and he’s going to frow up real fast.

SPEED WALKING the film follows martin as his world turns upside down and then rights itself in the wake of his mother’s death from cancer. It sends ripples through his family as his father retreats to the basement, his brother refuses to take off his mother’s glasses and Martin finds his hormones starting to rage. It makes for a bumpy coming of age.

Beautifully acted by everyone concerned and with expert direction by Niels Arden Oplev who did the original films about The Girl With The Dragon Tattoo, SPEED WALKING is a lovely film about growing up. It is a film only could come from Denmark with its frank unblinking look at life, death and sex. I say that because while I want to rave about what a great family film this is, some parents will not like the conversations about sex this film might spark with younger kids. On the other hand there is something about the film that makes me wish I had run across this when I was kid. (More so since I would have been Martin’s age in 1976 when the film is set)

This is a wonderful gem of a film. Recommended for someone wants agreat coming of age tale that is light years from Hollywood.