SUSHI TUSHI OR HOW ASIA BUTTED INTO AMERICAN PRO FOOTBALL 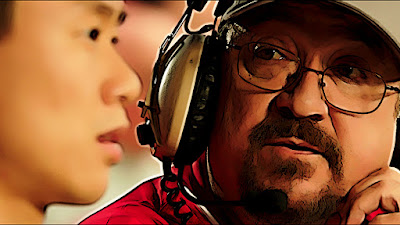 One of the worst comedies of the decade has a desperate football team hiring sumo wrestlers to play on their offensive line.

Suffering from deficiencies on every level (bad cast, bad script) the film is DOA. If you need proof look at the altered visual style the film takes during the football games. clearly using green screen and overlays on the images. Its a desperate attempt to hide that the filmmakers went no where near a football field. Its a failed ploy to trick us into thinking they were clever, but it just looks awful.

The most awful thing of all is the complete lack of understanding of the rules of football and how the pro game works. The fact that the film doesn't understand the game it is about is going to piss off the only potential audience for the the film, drunken football fans. The mishandling of the game is so bad that anyone watching it will turn the film off ten minutes in.

Hands down one of the worst films I've seen in the last decade or two. Its so bad that even MST3K or RiffTrax couldn't improve it since it keeps shooting itself in the foot and you are dumbstruck by its awfulness.

Avoid this film at all costs

Email ThisBlogThis!Share to TwitterShare to FacebookShare to Pinterest
Labels: comedy, mst3k material, not worth the effort