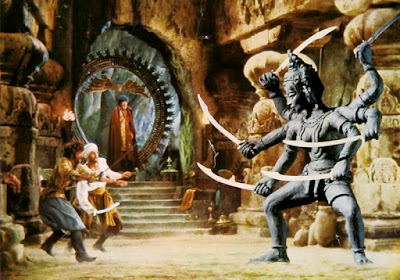 The Golden Voyage of Sinbad ruined me. It is a nigh perfect film that some 44 years since first seeing it I’m still discovering things in.

The plot has Sinbad battling the evil Koura to discover the hidden mystery behind some golden amulets that fit together. Taveling to a far off land Sinbad and his crew have to face great dangers

The cast is great with Tom Baker perfect as the Koura. If Doctor Who hadn’t come along I would always think of him in this role. Its perfect evil- he is a man who is so sure of his win that he is willing to give bits of his soul away piece by piece.

John Philip Law has never been better. Disappearing into the role he takes one of the best written fantasy scripts and gives it depth. He is a hero who will do the right thing- who is out for adventure (he gets nothing in the end except the girl) and stand tall doing it. He never gives up. His character has become a guiding force in my life.

And surprisingly Kurt Christian as Haroun shines. Initally a drunk lazy sone of a merchant he is forcibly put on the ship and tries to escape but when danger comes he is always the first one to act, killing Kali or shooting the arrow that rescues them when buried. He claims being fearful but always steps up. It’s a wonderfully shaded character and Christian is unfairly left out of discussions.

And of course there are the monsters, from homunculus, to figure head, to Kali to the gods of the end the film is a visual delight.

This is just great filmmaking from top to bottom. I can’t recommend it enough.
Posted by Steve Kopian at August 27, 2018