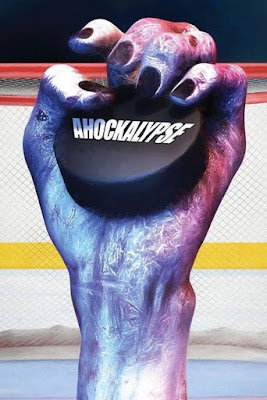 You're really going to read this piece and think I'm going to have a real review? Do you really think a hockey/zombie comedy can be taken seriously? I'm going to say a few words about AHOCKALYPSE but do you actually think anyone who is going to watch it really cares about "quality?" All that matters is is are there laugh and are the effects good. (Yes on both counts)

AHOCKALYPSE concerns a zombie out break right after a championship hockey game. As the winners party, the zombie plague spreads.

Full of knowing laughs and intentionally over the top blood and gore AHOCKALYPSE is a blast. I laughed and chuckled at both the jokes and the fire hose sprays of blood. Yes this is silly, and the filmmakers know it and use that to milk laughs such as the guy ho goes to help two frightened children but who are clearly undead monsters. We know how the sequence will go and it does, but its twisted in a knowing way to make the laughs come.

I had blast. And assuming you just go with the mirth and mayhem you will too.

A wonderful bloody delight, so get some popcorn and a beverage of choice and enjoy
Posted by Steve Kopian at August 15, 2018