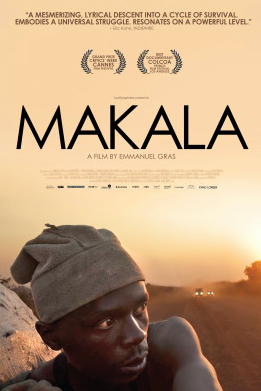 Kasongo is a 28-year-old man living in Congo with his wife and family. He is trying to make enough money to buy a house for his family by making charcoal from the hard wood trees nearby. We watch as he goes goes through the entire process from falling the tree to making the charcoal to selling it.

Gorgeous to look at observational documentary carries you along with just what a hard process making charcoal is. It is  long and drawn out and we are there for it all. We are also there as Kasongo travels into to the city and deals with people who are trying to get the best deal for themselves or take what Kasango has. Your heart will break at what he has to go through.

At this point a little bit disclosure my feelings toward MAKALA shifted after I read the press notes. While I liked the film when I watched it blind, my attitude changed once I read the notes on the film. As is my norm I don't look at the notes and only do so if I want to check on some bit of information. In reading the notes, particularly the interview with director Emmanuel Gras my attitude changed.

While I know and understand that all documentaries fudge things, most obviously the directors choose what we see as well as compress events. Gras said that while Kasongo did what he normally would do he  and his crew controled when and how certain things were done, altering how things played out for the camera because they had only a limited time to record events. While I know that there is often that sort of thing going on saying it kind of  makes me wonder what was fudged. I suspect nothing, but still the doubts creep in and it colors what I think of the film. Part of the problem comes from having seen Jon Kasbe's WHEN LAMBS BECOME LIONS earlier in the year. Kasbe's approach was to spend lots of time with his subjects and to simply film and let things happen and then worry about it all later.

After reading the notes all I could think about was how did this effect what we see and how does it alter our perception of reality. Those are two questions you really don't want pinging around in your head when you have to be objective about a film.

The question now becomes where does that leave this review?

It leaves me keeping it simple and just saying that this is a very good observational documentary that is gorgeous to look at it. If you like this type of documentary it is recommended when begins a run at the Museum of Modern Art in New York tomorrow.
Posted by Steve Kopian at August 23, 2018