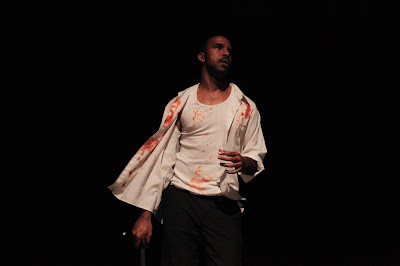 COCOTE is an art house darling that has been kicking around the festival circuit for a while. I've heard a great deal good about the film and with it opening tomorrow in theaters I decided to take a look.

Going home for his father's funeral, Alberto realizes that he is expected to get revenge for the death. A mild mannered Christian he wants no part of the now alien religious rites or what is expected from him, but still he feels destiny pulling him toward violence.

Filmed in a variety of image ratios, styles, in both black and white and color  the film goes along in its own way and it'sown pace often not even filming the action but keeping things off screen. It is the sort of thing that highbrow cineastes  love but which drive most viewers from the theater. Count me in the second group of viewers since I kind of stopped caring about the narrative all together and simply watched the technical virtuosity of how the film's ever changing look and style as put together.

The film is like jazz. It is one long cinematic riff  of a film with director Nelson Carlo de Los Santos Arias simply putting his film together with how he feels at that moment it goes where the moment takes him. Like some legendary jazz recordings I've heard I am intrigued on an intellectual level by what the musician was doing but I don't think all the bits go together. Frankly I'm kind of in awe of  de Los Santos Arias' technical achievement but I really can't connect to it. I can't connect to the emotion and themes when the director keeps looking away.

In many ways the film is also very much like the Jean-Luc Godard films of the last four decades which for me never work. Its jumble of styles, which force our gaze away from the main action and it possess an intellectual detachment from the emotion . We feel nothing emotionally.  We can connect intellectually but we feel nothing, or at least I didn't.

I know there is a wonderful story buried in the middle of COCOTE but the packaging is too distracting to fully engage. While some would remind me that I have to work with a film (a statement I frequently use myself), I would reply that I need to be met half way and need a reason to do so. The film simply throws things out and simply says "you put them together."

When I finished the film I tweeted to no one in particular "pretentious twaddle" which sums it up.

If you are cineaste with a taste for the art house give this film a go. Also if you want to see a technical marvel as styles of filmmaking blend together and don't mind the emotion getting lost give it a shot. All others need not apply 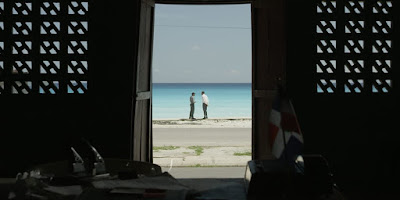