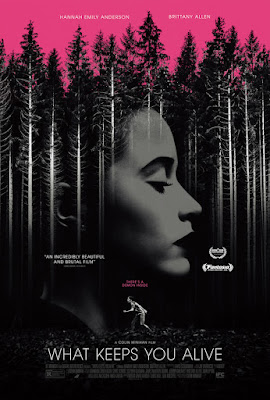 Having played Lincoln Center Saturday afternoon as part of Scary Movies XI and opening in theaters and on VOD Friday WHAT KEEPS YOU ALIVE is a lovely curates egg of a horror film that works on a purely visceral level but really doesn't make a whole hell of a lot of sense.

I'm told it works best the less you know, so I'm going to keep the plot discussion to a minimum. I went in knowing almost nothing which was fine  but despite the warning "to know nothing" I've seen enough films to know more or less where this as going real early on.

The simplest way to put the plot is Jackie and Jules head into the woods to celebrate their one year wedding anniversary and then things happen.

Before I get to the things that bothered me let me say that as a pure thrill ride WHAT KEEPS YOU ALIVE is really good. I don't like these sort of films as a rule, but it's so well done and well acted I have no doubt that people are going to eat this film up. Regardless of what I'm going to say next it is a film that should you like horror films it is worth a shot.

And now a possibly spoiler filled non-specific discussion of my thoughts on the film.

As well made as the WHAT KEEPS YOU ALIVE is, there are problems.

First and foremost is the fact that despite all of the talk about how it's best not to know anything, if you've been a fan of horror films or thrillers then you have seen a version of this film before. As I said above I knew early on what was going to happen.  The fact that the prime audience for the film are going to know what happens about ten minutes in really decreases the tension.  Don't get me wrong there is tension because we don't know specifics, but we really shouldn't have had any idea what was going on or writer director Colin Minihan should have turned it against us.

Worse the feeling of being here before is compounded by both the endless foreshadowing in the dialog. There are these lines of dialog which while may not give away specifics clue  us specifically into what is about to happen. There should have been no fore shadowing. The key event should have just happened with zero set up.

Making things less scary is the music. I may hate the use of music for jump scares a great deal but the use of music to make a point, especially when nothing has happened yet is worse. Something happens or is said that is a clue, an ominous tone is heard. It is as if Minihan doesn't trust his audience to parse out the clues.

And there are plot problems. Not only do we go down the road most traveled at times, Minihan tries to explain things and it all falls down. Worse we get a couple of even dumber turns of events that make you want to pull out your phone and email Minihan and ask him why he had things go that way when it makes no logical sense.

And despite my reservations I kind of like the film. Its really well made, has two solid lead performances and it kept me watching.  The fact that I made it all the way to the end says a lot. Its not that I don't watch to the end of movies, more that when a film has some the problems that this one does I stop watching and don't bother to ever say a word.

Actually the best thing I can say about the film is it's a good popcorn film, one where you watch it to be entertained for 100 minutes but nothing more. 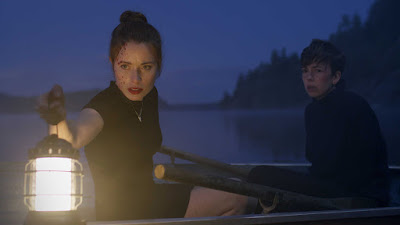