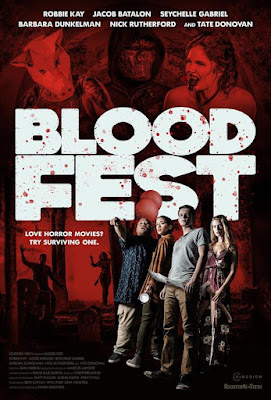 Hitting theaters and VOD Friday is BLOOD FEST. The story of a horror loving teenager who despite his father's wishes, goes to the Blood Fest, a horror festival that is suppose to put real horror back in the movies. Actually it's and evil plot to kill a lot of people and our hero and his friends are going to have to use their knowledge of horror films to survive.

How you react to the film is going to depend on what you want from the film. If you want a "satire" of the horror genre that is incredibly bloody, intentionally over the top, and reasonably well put together you are going to love the film.  If on the other hand you want something that doesn't hit all of the horror cliches and which you will literally have figured out before ten minutes are out  then look elsewhere.

Personally I was done ten minutes in. Yea the gore is some of the best in recent memory, but the plot is old hat, there are no scares and literally minutes in I pretty much knew everything that was going to happen. There were simply no surprises other than how people died.

I'm sorry I am weary of horror send ups and satires with self aware plot lines. Yea, its great when it works, but when it doesn't it comes off as really lazy and makes me wonder if the writer director didn't trust his material enough to play it straight.

Writer director Owen Egerton clearly knows his stuff. He gets all the details right, and truth be told he has made what should have been a really good film, but the humor takes the edge off it all.  As I said above there is no scares. If Egerton had played it straight and wasn't knowing (and if he had reigned the plot in to make it even remotely plausible even on its own terms) he could have had a film that was more than one of the best horror films on a technical level. This could have been a good film if it had tried to be more than just one crazy sequence after another.

In describing the film to my brother after I saw it I basically said how good it was in pieces but it never came together and I was left disappointed. Not because my expectations weren't met but more that what is good ultimately went to waste in a film that is going to be quickly forgotten.
Posted by Steve Kopian at August 28, 2018