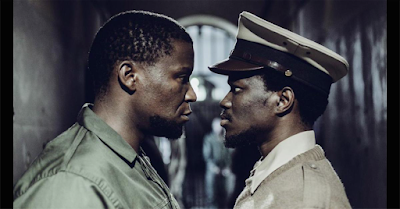 Zwelethu Radebe’s HANGMAN will move you. Even if you kind of figure out what it’s all about, the beauty, simplicity and grace of its telling will leave you moved and staring at the screen misty eyed.

The plot of the film has a black prison guard during Apartheid discovering his long absent father in a group of prisoners brought in to ne executed. As the time for execution approaches the story of the past is revealed.

Half way into the film I was rocked. My legs had been kicked out from under me. I was watching the lunch during my lunch break at my day job. One of my co-workers could hear me audibly reacting.

“Are you okay?” they asked.

“That must be some movie.”

HANGMAN is brilliant. It does more in its 22 minutes than most features do in 100.

While I could wax poetic about every bit of Hangman, the one thing you absolutely need to know is that what makes the film so powerful is that it gets every emotion dead on perfect. Every inflection, every gesture, every look everything that any one on screen does perfectly conveys the emotion of the situation. To take it further not only does the film get the emotion right it always feels right and true. Yes the film is playing with what we feel, but it doesn’t yank our chain or do something because it will get a reaction. When we reach the conclusion we find ourselves broken because we arrived there honestly. It is rare to find that depth of emotion in a feature film, but to find it in a short a form where directors take short cuts to get their points across is rarer.

It is a true cinematic treasure.

Hangman is a must see. It is one the best films you’ll see all year.