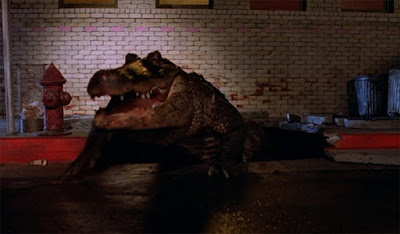 Lewis Teague’s ALLIGATOR is based on a story and script by John Sayles. That should be enough to tell you that this version of the alligator in the sewer story is not going to be your typical one.

The plot takes the well-worn mythic story about a baby alligator flushed down the toilet growing up to be a terror and spins it with genuine scares and humor. The film is genuinely chilling and appropriately funny in all the right spots. That it works as well as it does is largely due to Sayles stellar script which walks the fine line between serious and satire. It is pushed over the top by the cast head by Robert Forester and Henry Silva who play it perfectly, selling it to us at every turn.

Being old enough to remember the film’s original release in 1980, I remember the delight reviewers had at the film. Coming late in the wake of horror films that resulted from JAWS, ALLIGATOR was a film none of the critics really wanted to see, until they saw it in which case they gushed delightedly about how the film subverted conventions and balanced the horror and humor.

I don’t think that the film is remotely scary any more but it is still a great deal of fun. It is both still funny and surprising tense. I go for years between screenings and each time I see it always forget bits of what happened and find I’m leaning in waiting for things to happen.

If you’ve never seen ALLIGATOR and live in New York I highly recommend you make a mad dash for Lincoln Center on Saturday and see the film when it plays Scary Movies
Posted by Steve Kopian at August 14, 2018