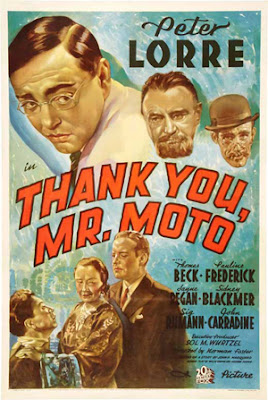 Second in the series and one of the grittier Mr Moto films THANK YOU MR MOTO was, I would think, one of Peter Lorre’s favorites of the series. Don’t quote me on that, but I think the fact that Lorre got to play the role under heavy make-up (he’s undercover) would have thrilled him since he was constantly trying to do more than just the same old role.

The plot of the film has Moto involved in a plot to find the tomb of Genghis Khan. Whoever can  can get the scrolls hidden there  will have the path to Khan's hidden treasure and thus power over much of the world. Murder and mayhem result.

This is probably the best Moto film to see if you want to know why the series was different from and just as good as the Charlie Chan films. Some people have compared it unfavorably to the Chan series and I believe they are mistaken. In this film we get Moto truly traveling the world, out among exotic locations fighting the bad guys. It’s a film full of action and intrigue in a way that the Chans never were. Chan was a detective, Moto was an Interpol operative he could go and do more than solve crime. Lorre’s characterization wasn’t inscrutable or quietly cunning, rather his Moto is a friendly talkative fellow who engaged the enemy the better to convince them that he wasn’t a threat. He was also a man of action who actually gets out there and does something- even while maintaining his dapper identity- watch him as he bolts into the hotel in full peasant drag and then has to cover his tracks as they hotel police go after him. He is a kind of James Bond character.

This is one of the best program/series mysteries because it’s not city bound murder, but huge epic adventure with stakes larger than just finding a murderer or saving a lost invention. Seeing this film you understand what the series could have been had it not been a victim of the Japanese becoming an enemy with the bombing of Pearl Harbor.

An absolute must see for anyone who loves good movies.
Posted by Steve Kopian at August 26, 2018