The Trace We Leave Behind (2017) Scary Movies XI

THE TRACE WE LEAVE BEHIND is rooted in the financial troubles of Brazil. Corruption is rampant and the bid to host the World Cup and Olympics pretty much wrecked the country as contractors and politicians used it as an excuse to rape the country’s coffers for their own benefit. As a result of the rampant greed basic services are being cut and places like hospitals are being forced to close.

In the film one of the city’s oldest and most respected hospitals is being forced to close. They simply do not have the supplies or equipment to serve. They are not taking any more patients and everyone is being sent elsewhere. Because the hospital administrator won’t give up without a fight he takes in a new patient. This causes all sorts of problems but it is handled and the patients are moved and the hospital closes…and then the doctor responsible for the move notices that there is no trace of the last patient. This sets him on quest to find out what happened to her…

Is it madness, corruption or the supernatural? For a while we aren’t really sure what is going on and we are better for it as TRACE generates a good deal of tension as it drives headlong to its conclusion.

A largely tense little thriller TRACE generates chills as we are forced to ponder if things are happening or if our hero is going crazy. At times it isn’t clear and it keeps us off balance. Helped along by a killer visual sense we are disturbed simply by the images. This film looks great. And when the images are mixed with moody score things get even more creepy. It’s so good at creating a mood that it kind of is disappointing when the film resorts to jump scares, it doesn’t need them.

While I like trace a great deal and had a great time watching it, it completely faded from my brain the next day. Watching the film late at night I was creeped out and wondered if I was going to be able to sleep. The next morning I got up went through my day until late in the afternoon when I suddenly realized that I had to write the film up…and realized I had no idea what the film was. I put it back on and fell into it again. Don’t get me wrong it’s a great film it’s just not sticking in this brain. 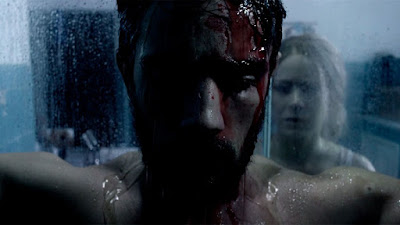