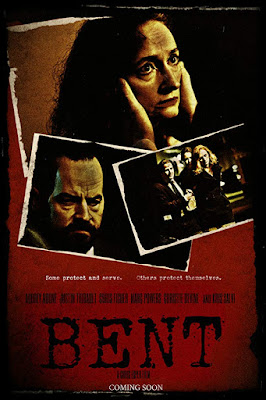 Chris Esper’s BENT is a film that should have been a feature. This tale of a corrupt cop caught between Internal Affairs and the crooked cops she works with is simply trying to juggle too many balls, and dealing with one out of place performance to reach the true greatness it aiming at.

The plot of the film has Brenda Hoggins and her partner robbing and killing a drug dealer. When the drug dealer’s girlfriend walks in her partner simply shoots her in the head and stages the crime scene. Brenda doesn’t like it but this is the way things go. Internal Affairs doesn’t like it either and one hard nosed IA cop goes after Brenda to pressure her to roll over on her partner.

A solid little police drama the film has a lot on its mind. Looking to explore guilt, corruption and the blue wall, BENT is looking to drop us in to the world of bad cops. Focusing on Brenda‘s caught in the vice existence the film presents the familiar tale in a new way we really see the toll as something other than just a stoic cop not being affected. We’ve rarely been raked over the coals in contemplating what the evil the cops do means to the human psyche. This is not a story we've seen before.

If the film has any serious problem it is the performance of writer Kris Salvi in the role of the IA cop Earl Duke. Playing it way (way) over the top his performance is laugh out loud funny for all the wrong reasons. In his interrogation scene he starts it crazed and then goes insane. Coming in the middle of a short film where we have no real introduction to the character the role becomes a cartoon. There is nothing to his role except vitriol and madness.  Lacking any real sense of character outside the madness, Salvi comes off as the wrong sort of silly. He is a vaudeville "boo hiss"  mustache twirling villain, which is dead wrong in a film of carefully modulated performances.

The sole bad performance is even more out of place in a film where Audrey Noone gives an award caliber performance as Brenda. She makes us feel each turn of the screw by what we see is passing behind her eyes. Its a stunning performance and one that holds the film together and our attention regardless of what is happening elsewhere on screen.

While good in it's present form  BENT should have been a feature. Had this been longer the one flaw  wouldn’t wouldn't have been noticeable. Additionally a longer film would have allowed for a better exploration of the dynamics between characters and of the themes the film is highlighting. BENT's examination of bad cops is worthy of a longer look. We could have seen how the aftermath of the shooting plays out in more lives.

But I am quibbling BENT is a good little drama as it is now. It brings us into what it must be liked to be pressured to turn on one's partner. My arguing that the film should be a feature should not be seen as anything negative only that I want more of what is here. The world could use a film that doesn't follow the typical good cop/bad cop tropes.

BENT is very recommended when it hits the festival circuit this fall.
Posted by Steve Kopian at August 18, 2018