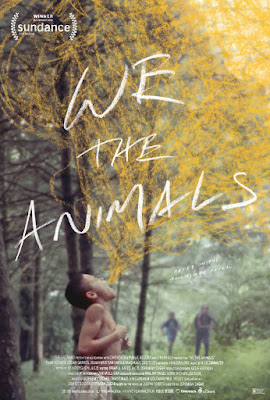 Based on Justin Torres‘s book WE THE ANIMALS split the critics at Tribeca. Some of them liked it and some of them didn’t but all of them said that in the end they knew they had seen something and they were glad they had seen it. Now having seen the film I completely understand the split, it is a film that reaches out and grabs you by the throat and shakes you.

The film is the story of a family as seen through the eyes of one of the three boys named Jonah. It is also his coming of age tale. More artistic than the others jonah keeps a journal of sorts of stories and pictures of what he is experiencing. We watch as the family spirals, how the relationship between the parents ebbs and flows, becomes abusive and is mimicked by the children. We also watch as Jonah begins to find himself

Shot for maximum emotion the film bounces between angles, styles and grains in order to perfectly get across what Jonah is feeling. A good portion of the time it is discomfort and frustration as life pushes down and tries to crush him. At the same time we get a sense of the love that is floating around in the family, despite the fact that at times there doesn't see to be any.

This is not an easy film and it’s tough viewing. Sitting in the dark and watching the film I could understand how my fellow critics felt walking out the screenings when the film premiered at Tribeca. Like many of my friends I was left reeling. Why had I chosen to go into this place? Yes, there is some hope, but it is still hard to experience.

My reaction to the film the first time through is mixed. I felt more than a bit battered since some of the film kicked up things from when I was a child that I’d like to have kept boxed up. I’m not completely certain that director Jeremiah Zagar  ties everything up the way he should. On the other hand the film is most certainly an experience and the work of a master director who will not have his hands tied. It is a film one can admire. I’m still trying to work out if I like the film, but it is a work of such power that I don’t think I’ll know that for a while.

What intrigues me about the film is that I think this is a film that will get better the more you see it. I don’t think that this is a film that you can fully come to terms with after seeing it the first time. I know I haven’t. This is partly because it is so raw that it’s like touching a nerve but mostly the fact that the way the film is made, the mixed styles and the POV of a child in a tough situation makes this hard to grasp the first time through. When I finished the I had a sense that I only really began to understand it when I finished it and that I needed another pass through at some later point when things wouldn’t be as raw.

Yes, most definitely. I will not even hazard a guess if you will like it. However like my friends who saw this at Tribeca earlier this year you will most certainly feel as though you’ve seen a film, for better or worse.
Posted by Steve Kopian at August 17, 2018