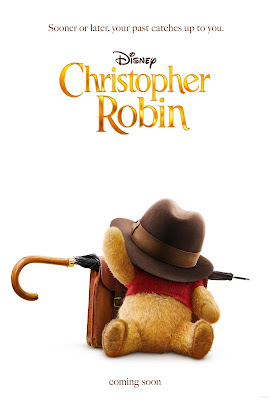 As much as I like CHRISTOPHER ROBIN I think we'll have to wait to see if the film becomes a classic. I think it will, but I think it will have to get to the point here we can accept that we know how the film is going to go

After getting a send off from his friends, Christopher Robin goes to boarding school and then grows up. Years later, Christopher is married with a daughter. He is being pressured to cut 20% from the company he works for over what should be a weekend holiday with his family. Staying behind in London to work on the cuts Christopher finds his life spinning out of control as Winnie the Pooh shows up and asks for his help to find his friends who have gone missing.

I love the film so much I want to tell you everything that happens, but I won't. You need to find the wonder for yourself with out my mucking it up for you. However I will say a couple of quick things.

First the film's arc doesn't surprise. You can pretty much lay out how this is going to go before hand, and you'll find that's what it does. There is nothing wrong with that, but it kind takes away from there being any surprise.

Not that it matters for the kids ho will fall under it's spell. Leaving the theater a couple of kids behind me were still reeling from what they thought was going to be a tragic story. Their mom tried her best to explain that there never was any doubt, but the kids were still worried.

Which brings me to the next point this is going to play differently depending how old you are. As an adult I could see the bitter-sweetness to the story and what it all means. The opening going away party for Christopher Robin where we know he is going off "forever" to be an adult damn near broke me. The absolute sadness at giving up childhood crushed me. As did other moments. On the other hand being an adult and see the return of childish things delighted me to no end. Certain bits of word play went over the heads of the kids in the audience but brought roars of laughter from the adults.

Some how I think in five years this is going to be heralded as a classic.

An absolute delight for anyone who is still a kid in age or at heart. 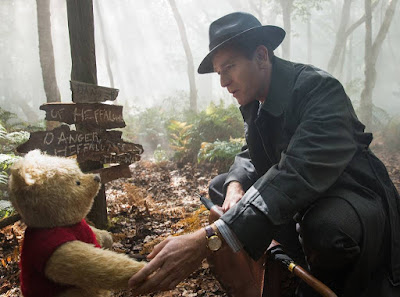