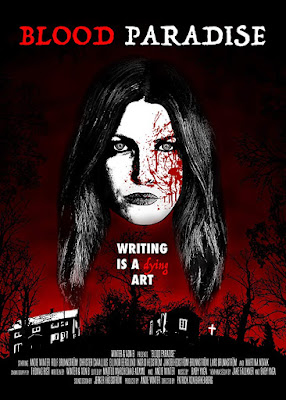 Robin Richards goes to Sweden to relax, take in the country and find inspiration for her new book. She stays on a farm with some weird ass people and eventually murder and mayhem happen.

This uneasy mix of horror and comedy does a disservice to both genres as Patrick von Barkenberg hamfistedly mixes the two with a helping of WTF weirdness to no good effect. Poorly plotted with characters who just make no sense this is an effort to do something unique that falls on its face.

The problem begins at the start with a bondage scene between our Richards and her boyfriend which is "played for chills" before being flipped for "laughs".Its neither funny nor scary. When a couple of scenes later when von Barkenberg goes to town sucking Richard's toes all I could ask was - why? In an age of 50 SHADES OF GRAY the sequences just fall flat.

From there the film moves to Sweden where nothing makes any sense on any level as everyone is weird for no reason until they turn homicidal. Even the animals are nuts None of  the characters feel connected to each other from the farmer Richards stays with, to weird guy who picks her up at the train with a sofa on his roof, to the guy in a wedding dress to even Richards herself. Everyone has jetted in from somewhere else.

By the time things turn bloody I didn't care but was glad to see at least some attempt to make something happen.

I suspect that von Barkenberg wanted to make a movie and do something different but he has no sense for tone nor plotting. Ominous music plays through comedic scenes. What should be creepy sequences are played for laughs. Things just happen. People who seem normal or a little off suddenly turn out to be bat shit crazy in ways that seem completely out of character. Why? because the director needs things to happen.

I  am completely perplexed  by the utter nonsense that is this film or that a festival would program it. What am I missing? What am I supposed to be getting that I'm not?

Don't get me wrong I love weird nonsensical films, but they have to hang together within their own madness. BLOOD PARADISE is just a collection of weird shit with only a thin pencil guideline of a plot which keeps wiping it away just because.

And the thing that is killing me and why I've delayed posting a review is that this could have been a better film with writers and a director who knew what the hell they were doing. Its a film that isn't good by any stretch of the imagination but doesn't suck enough to either ignore, truly crucify or make a worst of the year list. Its in the Twilight Zone of almost films that just piss the living shit out out of you until you scream and punch a wall. 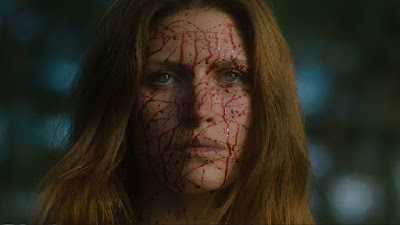 Email ThisBlogThis!Share to TwitterShare to FacebookShare to Pinterest
Labels: american, comedy, horror, not worth the effort, scary movies 11, sweden