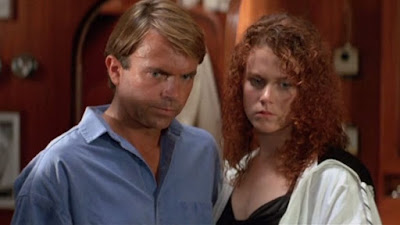 Sam Neil and Nicole Kidman are sailing the seas when they come upon a drifting sailboat. Aboard it they find the ship is sinking a young man, Billy Zane, all alone. They offer to help, but Zane has other ideas, taking their boat and Ms Kidman and leaving Neil to die when his prison eventually sinks. As Neil struggles to get the boat moving, Kidman has to play cat and mouse with the increasingly deranged Zane.

A super little nail biter DEAD CALM is one of the great sea adventures. Brilliantly marrying the lost at sea subgenre with the psycho on the lose one we have two great stories working in tandem to keep our attention. One of the best things about Philip Noyce’s take on the tale is that in stripping the source story to its basics (several additional characters were removed) it allows Kidman to be not just a reactor waiting to be rescued but a woman in charge of her life.

Beautifully shot to maximize the isolation and the claustaphobia DEAD CALM works best of the big screen. It’s not a matter of the size of a picture but the fact that in a theater you are away from distractions so the you really feel isolated and a drift.

See it Sunday at Lincoln Center as part of Scary Movies XI
Posted by Steve Kopian at August 16, 2018