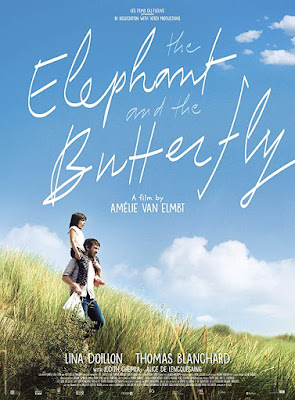 Amélie van Elmbt’s has struggled with the challenges faced by most single mothers. The struggle to provide everything, feeling conflicted over work that takes her away, and keeping her professional ambitions a priority. And the travel and long hours of being a writer-director aren’t easy when raising a young daughter. So to explain what she does, Amélie took her daughter Lina to work with her, casting her in her new film The Elephant and the Butterfly. In the film Thomas Blanchard plays Antoine, a chef who’s suddenly decided he wants to meet Elsa (Lina), the daughter of the girlfriend (Judith Chemla) he left before she was born. Finally meeting her, his ex refuses to introduce him as her father but finds herself forced to entrust her with him for the day in a moment of desperation. At once a single mother’s love letter to her daughter, as well as an empathetic look at fatherhood, The Butterfly and the Elephant is a delicate, heart warmer.

You co-wrote this film with Matthieu de Braconier. How did that partnership come about?

I wrote the first draft myself, and then after getting a producer I decided I wanted to work with someone else, to get some distance from the project. I wanted to get another point of view, specifically a male’s, because it’s about fatherhood.

What changes did you make when you started working together?

It was interesting because it seemed that everyone who read the script, owned one of the characters, depending on if they were male or female. The men I spoke with really put themselves into the shoes of our lead character. And once I brought him onboard we decided to really focus exclusively on the relationship between this man and his daughter, because when we went to deep into why the broke up, people started to take sides for or against him.

Did you want to make a movie with your daughter or was it more serendipitous?

I was a really young mother, just 24, and I raised her on my own. I was always really focused with being good at parenting, but I also wanted to work in films. So it was always such a complicated balance, and I decided I wanted to do something where I could combine cinema and parenting. So the script was made for her. She inspired me a lot, and I like the idea of sharing this with her. She’s always wondering “why does mommy go away?” and it let me show her my work and share my love of cinema.

A five year old, I’d assume, she can’t really read lines. How did you work with her on dialogue or did you plan for the film to be mostly improvised?

We decided we wouldn’t tell her the whole story, and we’d only tell her the point of view of her character. So she didn’t know until the end of the movie that Antoine is her father. And as we told her the story, we’d tell her what was going to happen in each scene. And then, she had a visual script with all these drawings about what her character would do or say. The story of the frog with the big mouth came from her. And I didn’t want her to meet the main actor until the first scene they were in. And I didn’t know if they would have a strong connection. And the producer and I said had to decide what to do if they didn’t match, and we decided that if that happened, we’d tell a story about a little girl who meets her father but it was too late to have a connection. But it turned out that they had a great connection and I didn’t have to rewrite the whole film. While filming though, I’d show her the pictures she’d drawn to reminded her what to do next in the scene.

That puts a lot of pressure on your leading man. He’s acting with a kid and knew that how he connects with her will dictate how the film comes together. How did you cast? Had you seen him in anything before?

I’d seen him in another film, a Belgium film where he was acting as a teenager with mental problems. He was great in that, and what I loved about him for this part is, he looks like an old Peter Pan. He looks very young and I thought it would be so unexpected to cast someone as a father who looks so young. And I knew he’s be an actor that likes to work and would enjoy the challenges of making this movie. He’d never cooked before so he learned to cook. He’d never driven a motorcycle so he took lessons. And he doesn’t have children and had never really played with one, but he was great with her. We really built the character with him, and we gave him a lot of the same freedom we gave Lina. We were just a really strong team.

Where did the premise for the film come from, to make a film that really explored fatherhood?

As a mother, I was curious to explore what that means myself. I felt the baby kicking and growing inside me, I felt motherhood. But how do fathers feel that, how do they feel themselves becoming fathers? And I read a lot about that, and it was said that it comes in stages. It starts when a woman tells him “I’m pregnant.” But once the child comes, there is a moment when a child recognizes you as their parent, and you recognize them as your child. But men also have to recognize themselves in their new role as fathers. And it’s not as automatic as I felt when I gave birth to my daughter. The film’s all about that. All the way up to the end the question is, does she think he’s her father? Does she know him? He wants to do something, to claim his fatherhood. But he doesn’t know how to do it. And at the end, he wants to keep that realization between them.

Camille is an interesting character because as he’s developing this very sweet relationship with his daughter, we’re only getting glimpses of her life as a single mother. How do you put across the challenges she’s faced as a single mother because of his absence in the years leading up to the film?

She sacrificed a lot for her child. She has this really important meeting that she’s going to miss, again, and his arrival is so clumsy. I love the way she laughed at him just showing up out of the blue. But realizing that at that moment she’s going to miss another meeting and she needs his help. She decides to do this one thing for herself. And then she just completely loses control. And now they’re obliged to do something for each other. She’s obligated to let him meet and spend time with her daughter, and he’s forced to be there and take care of her. And then when they come back together at the birthday party, she’s uncomfortable seeing him, thinking of what could have been. And he’s unsure where he can fit into this family.

I love that scene because you see all this tension but they’re trying to hide it from her and the rest of the family.

And you can just see her holding things in. But really everyone’s pretending a little bit and ignoring how complex this situation is. She’s feeling uncomfortable to be there. He’s nervous. His family’s unsure. But the reality is, this little girl is making the situation less complex, because they all want her to be happy. She’s so happy just eating cake. And then when they talk later on, and she says “it’s too much to take” you’re like, “of course it’s too much…it would be too much for anyone.” She spent five years wanting something like this, and now it looks like nothing even happened.

So much of the film is told from Lina’s perspective. How does that change the visual approach you took on this film?

I worked with the DP on the project, who said, “you know your child, you know how she’ll move.” So I held the camera, we both held cameras actually. So as we were setting the frame, Lina’s would ask, “what if I move like that” so we knew what she’d do and where she’d move.

Was she self-conscious in front of the camera?

She got comfortable as we went along. You might notice that she’s a little bashful at first but by the end she loved it.

But it works for her to be a little shy of the camera because it can interpreted as being shy around this new man.

And that made me so happy. And she’d at first look to me and ask, what should I do? But then she got used to it and seemed to really enjoy it. And then she started to understand what it means to be an actress. She learned how to play an emotion. She really grew making the film?

What was her reaction to seeing the film?

It was amazing. It was a great screening and everyone applauded. And she turned to me and asked “are they applauding for me?” I asked her if she liked that and told her that they applauded because she did a good job and worked hard. And now she understands what mommy does and why I go
away. She used to say other mommy’s don’t have to go away or would ask why I’m home and I’d say “mommy’s working, she’s writing a screenplay.” I’d love her to act in something else, but right now I want her focused on school.

When did Martin Scorsese come aboard and attach his name to the project?

I came to New York with my first feature film and won first prize at the First Time Film Festival. He was the godfather of that festival and one of the prizes was to share a table with him and other winners. And we had a great conversation so I left him my DVD. And 3 months later I got a beautiful letter telling me how much he liked the movie, and wrote to contact him in the future. But that was years ago. And then getting funding for this film, we had a lack of money right before starting
production, we lost some funding. And I suggested we contact Martin Scorsese and ask him to contribute. So we wrote a little asking him for a little more money, and three days later he answered yes. And even though I suggest we do that, I still couldn’t believe it when he said yes. He’s such an icon, I grew up on his films.

The Elephant and the Butterfly hits VOD and home video today
Posted by Steve Kopian at August 28, 2018