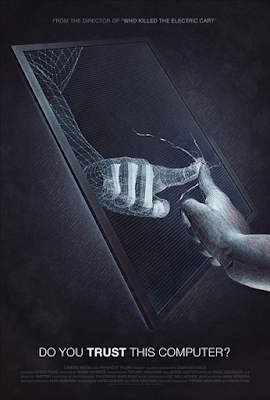 How you react to DO YOU TRUST THIS COMPUTER will be determined on how much reading and watching you’ve done on the subject of artificial intelligence and our rapidly changing technological existence. The film is a kind of greatest hits that’s explores many of the ideas that having computers that thing in our lives means and will mean as they get closer to matching real living beings.

I mention the idea about how much you know as the key factor for this review because I was sitting at lunch during my day job watching the film when one of my co-workers came in to the room to ask me a question. Intrigued by the little bit she saw she wandered out and came back with her lunch and joined me for the majority of the film.

When the film was done we started to discuss the film and my friend talked about how much she liked the film. For her it was a revelation concerning how AI is changing the world and what it may mean for society. I, on the other hand, liked the film but having been fed a steady diet of similar films over the last few years I didn’t quite like it as much. To be certain I thought it was an excellent primer but it’s 70 odd minute run time kept it from fully exploring some of the ideas it brings up.

DO YOU TRUST THIS COMPUTER opens Friday in theaters and VOD on August 21st
Posted by Steve Kopian at August 13, 2018