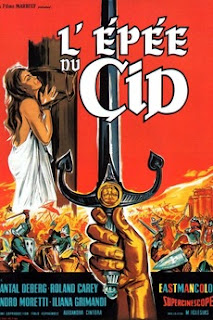 This clunky film was made to cash in on the Charleton Heston epic but really as noting to do with it. The daughters of El Cid ave married two bad guys who are interested in consolidating power. This as to do, in part, with two swords. As the bad guys try to get their way they are opposed by a rightful heir. Some kind of okay action happens

Much too talky low rent semi-actioner wanders around the countryside looking for something exciting to happen. The film begins with what would seem to be an exciting set up but it deteriorates into lots of non-action and some just okay sword fights. They might have gotten away with the few battles if things had been more thrillingly done, but they aren't and its kind of bores.

While far from horrible, this is more the sort of thing to put on late at night when you need to go to sleep.
Posted by Steve Kopian at August 25, 2018