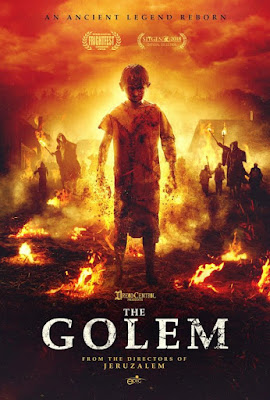 THE GOLEM is a great little horror film. Directed by Doron and Yoav Paz and written by Ariel Cohen the film is a wonderful trip into the sort of horror we don't get any more, horror that is more than just about the blood and gore.

In 1673 Lithuania a village of Jews lives in an isolated community. In the village lives Hannah,the daughter of the rabbi, and her husband. They are a childless couple on the verge of splitting. Years earlier they lost there son thus breaking the couple up emotionally.  While both struggle to get by Hannah loses herself in the teaching of the Kabbalah in the hope that it will bring her an answer about the death of their child. When a neighboring town of Gentiles is struck by the plague they go to the Jewish community looking for revenge.When things turn ugly, Hannah, uses her knowledge to try and create a golem, an artificial being, that will protect the village. She succeeds but it has a terrible price since not only did she fashion it out of mud and earth but her fear and hatred as well.

This stunning historical horror is a truly scary film. Gloriously free of the sort of the over used things that most modern horror directors throw at us, mad killers or evil spirits on the loose, THE GOLEM instead spreads fear by building characters and situations and then putting them in motion. First we are frightened by the evil that men do to each other and later by the fact that we are watching fear and hatred run rampant as a mindless beast acts as a vessel for the worst part of our souls. We fear because we are watching real people and not just props for a horror script to move around. This is not really a film about the monster but the people and what fear, hatred and loss can do.

As much as several recent horror films have been praised about being more than just the horror or the gore THE GOLEM is ultimately not really about the monster either. Fashioned as a kind of historical drama the film is more concerned with contemplation the nature of loss, the place of women in society, relationships, the breaking of taboos, antisemitism and several other themes. You could almost remove the golem from the film and still have an interesting discussion of what it is on its mind. This film is so much about ideas that when all hell breaks loose at the end I was kind of disappointed that we were getting a blood bath, even if that is the probably the reason the film got financed.

I love this film. I love that here was a horror film that engaged me on many levels. I loved that the film mad me work with it and not just wash over me. I had to pause and consider what as happening and what that meant. It is a kind of adult horror film about people that will probably disappoint anyone who simply wants just blood and gore and jump scares. Yes you'll get the golem ripping a beating heart from a chest but also considerably more.

THE GOLEM just premiered at Fright Fest in England and will  be playing in festivals through the rest of the year before getting a release i the US in February 2019. If you like more than just blood in your horror films I highly suggest you make an effort to see it.
Posted by Steve Kopian at August 27, 2018