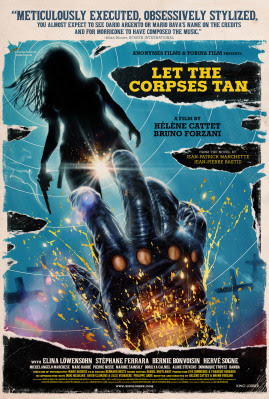 From Hélène Cattet and Bruno Forzani the directors of The Strange Color of Your Body’s Tears and Amer comes Let The Corpse Tan a retro mod euro crime thriller by way of gaillos, spaghetti westerns and the art house. Weirdness happens.

Actually the weirdness is in the telling. The film is based on a 1971 pulp novel about a gang of gold thieves who pull off a daring robbery. They think they have found the perfect hiding place on a remote island. The problem is an artist and her family are staying there and some cops have shown up as well. Mayhem results.

As for the telling its full of arty angles, over saturated colors, and flashy touches that all hearken back to the crazy daze of the late 1960’s and early 1970’s when Italian exploitation and westerns dominated the cinematic psyche. Every shot refers back to some earlier film, so much so I fully expect someone to annotate the film with every reference real and imagined. The look of the film is absolutely arresting….

…and completely distracting. While the film nerd in me loved the craft of the film, the emotional film lover checked out fifteen minutes in. My disconnect came not because the story wasn’t compelling rather that I was way too busy looking at the artifice. The artifice is great (it’s at times way cool) but I’m not sure there is any sort of beating heart inside it. It’s like looking at some really cool flashy pop art at a tourist trap shop in the city- the neon velvet paintings delight you in the minute you see it but nothing you’d either want to actually hang on your wall, especially when you realize you are going to have to carry it all day before you go home.

Don’t get me wrong its not a bad film, just nothing anyone needs to see unless they stumble on it or want to study cinema flash.
Posted by Steve Kopian at August 30, 2018