Earth vs The Flying Saucers 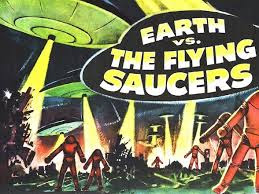 Alien invasion movie ala Ray Harryhausen is incredibly straight forward as the aliens come and the earthlings fight back.

Clearly made in a different time with a different outlook the film moves along at a good clip, teasing the full on invasion that ends the film. This film gives us a world where Washington can be (partially) emptied orderly in a couple of days. It is only after everyone is out of the way that the saucers come.

As a kid I was always mixed on the film, I wanted aliens from start to finish, but that isn’t the way the film works. After initial contact we really have to wait for the final half hour before the battle between human and aliens takes place. Once that kicks in the film is gangbusters as men are vaporized and saucers crash.

If you want to see aliens lay waste to Washington in glorious black and white this is highly recommended.
Posted by Steve Kopian at August 29, 2018