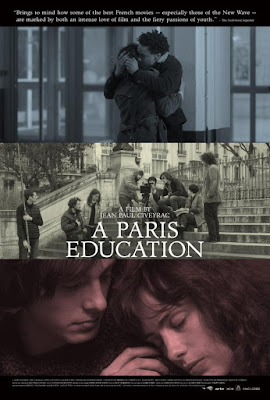 A PARIS EDUCATION is a good, if over long, film about a young man who leaves his home to go and study film in Paris. Once there he smokes, discusses films, smokes, beds some women, smokes, talks about films, and then smokes some more before trying to sort out where his heart lies. The mention of smoking is not out of place since I’ve not seen this many people using cigarettes as a statement in any film, even a Marlboro industrial film about the joys of smoking. (And I am not kidding about the amount of smoking in the film- we all could probably sue for the damage of second hand smoke).

This is a well-acted coming of age tale about a young man trying to come of age within a group of likeminded people. The film nails the pretensions of the film school crowd, where everyone wants to create, and everyone wants to outdo each other by being able to rattle off films and their directors and their deeper meanings. Oh to be young, foolish and willing to buy into the academic pretentious bullshit. Of course it’s all a cover for the insecurities of growing up and romance and the film nails that as well as we watch as our hero Etienne leaves a girl at home and then runs head long into several women at school who make his head spin as he tries to sort out what he wants from the relationships and life.

A PARIS EDUCATION amused the hell out of me. I enjoyed all of the intelligent talk about films and filmmakers, even as I roared with laughter at the pretentiousness of the characters. These are people who I have been dealing with for decades. People who are so lost in the deeper meaning of movies that they lose sight of the fact that many of the films they are analyzing are just an industrial product. They are grad school fanboys who take it all way too seriously. How you react to them may not be the same way I do, but I found most of the characters silly and rather sad.

On its own terms the film is pretty good. However I think it is somewhat  hurt by its two and quarter hour run time. While it allows for director Jean Paul Civeyrac to show the world of the students by having long scenes where no much but talk happens , there really isn’t anything going on other than the talk is going on and it kind of lessens interest. On the other hand the film beautifully shows how going out into an adult world changes us for better and worse, a fact we see in the arc of Etienne.

I like A PARIS EDUCATION and think it’s worth a look for film fans.
Posted by Steve Kopian at August 29, 2018