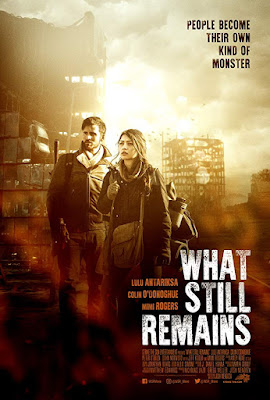 After a plague has ravaged the planet the survivors are scattered. Anna lives with her mother and brother, however neither  is long for the world. Her brother is lost trying to save her and her mother is dying of illness and Anna takes it all in stride. Meeting a young man named Peter, she is convinced to leave her home and travel to his community.Anna soon finds out that Peter has plans for her.

A really good underlying story gets lost in a film where the surface details were a little too neat and clean for my tastes. Little things in how the story was told pulled me out of the film.

I disconnected early in the film when with Anna's "its Chinatown" attitude regarding the loss of her family. Rarely has any one been so nonchalant about losing loved ones or even liked ones. There is hardened by life and there is not caring. Actually I wasn't a real fan of Anna's character since to me she seemed to behave according to how the film needed her to behave instead of as a real person. I don't blame Lulu Antariksa as Anna but a script which never gets the details right

Things are a tad too neat for me and I have lot of questions about the details. In a world where the plague has ravaged the population for 25 years and driven everyone to a post apocalyptic existence where does everyone get their salon haircuts or hair dye? Why don't any of the clothes or every day objects seem worn and beaten? Why don't the people look like they have been living a hardscrabble existence? How is it that when Anna breaks into a store at the start it looks as though it's been boarded up for months? It didn't really make sense.

While not a bad film, it has some great bits, I like the notion of this world and it's take on where society will go. For example the religious based community is fascinating, and some of the discussions in isolation are really good. Unfortunately the film never pulls it all together.  Nothing ever seems real or more than dress up. The result is this is an okay time passer but nothing more.