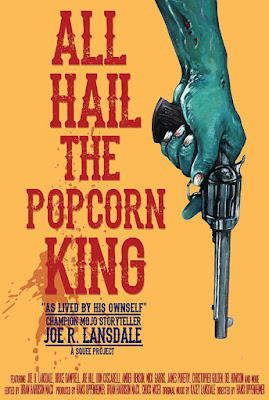 I discovered Joe R Lansdale via his Jonah Hex comic books. I  kind of knew his name but I don't think I really had read anything he had done prior to picking up the comics decades ago.  I then quietly began to search out more of his comics, only vaguely aware of his novels and short stories. I eventually turned to those to and I became over time a fan of his work.

While I am a fan, small "f", of Lansdale, director Hansi Oppenheimer and all of the people interviewed in ALL HAIL THE POPCORN KING are FANS, capital letters across the board. That is not a bad thing, it is instead a great thing because listening to people like Bruce Campbell, James Purefoy. Joe Hill, Don Coscarelli, Mick Garris, Amber Benson as well as the man himself talk I am creeping toward becoming a bigger fan.

ALL HAIL... is a look at the life and work of Lansdale. A loving portrait of the man's world it is a quick dip into a body of work that has influenced various forms of storytelling for decades, from comics, to movies, to TV and of course novels. Landsdale has quietly conquered every medium and in the process changed the way people tell stories. He has a unique blend of mixing humor and horror that is just entertaining as all hell. His characters are always far from cliche with the result that we always find our lives staring back at us.

For me ALL HAIL... is a glorious celebration of the man  who gets to hold court and tell a lot of stories about his life and his work. I love that the film never gets out of control. Running a brisk 53 minutes the film it remains a loving bear hug and never descends into annoying hagiography.

I do need to point out one small flaw in the film since it is one that may prevent some people from fully connecting to the film and that is the fact that the film doesn't go into great detail of Lansdale's work. Yes, we  books and stories are mentioned, a lot of time is spent discussing the Hap and Leonard tales and TV show, but we don't get enough of big enough sense of what his work is like. Watching the film I realized that outside of the stories I knew, I really had no sense of the stories mentioned. I wondered how this was going to play for those who have no idea who Lansdale is.

However the film is so good that I suspect that those who don't know the work will fall in love with the man and be tempted to try one of his books or films or TV shows or comics. I say this because there are enough indicators that his tales are a great deal of fun.

Should you see ALL HAIL THE POPCORN KING? If you are even the slightest fan of Lansdale it is required viewing. If you are not a fan, or if you have no clue who Joe R Lansdale is you should see it too because it will introduce you to one hell of a storyteller. (If nothing else it will reveal what the title of the film actually means)

ALL HAIL TH POPCORN KING will be released later in the year.
Posted by Steve Kopian at July 16, 2020