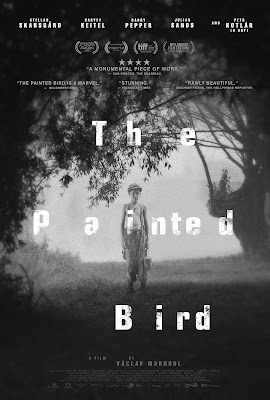 Sent away by his parents in the hope of keeping him safe from the Holocaust, a young boy ends up on a odyssey of pain when his aunt dies and he is forced to travel across Eastern Europe dealing with the cruelties of life and war.

There is no getting around it: THE PAINTED BIRD is a masterpiece. A glorious black-and-white poetic mediation on life and war, it not unexpectedly has sent people fleeing from theaters from its World Premiere at the Venice Film Festival. It is a film I never want to see again — yet can not wait to see again, so I can truly discuss the film with some semblance of intellectual togetherness. Honestly, this film is like being kicked in the stomach for the better part of three hours.

I need to state that a lot of people are going to get lost on the cruelties. I could list all the horrible, terrible things that happen after we watch the boy's pet set on fire while alive in the opening minutes, but simply listing them is pointless. I should warn you that this film will set you off regardless of how strong you think you are. Something in this film is going fuck you up (I can’t stress that enough). However, the twists and turns do have a point. This is not a torture porn film, but one examining the darkness and light (which is sometime misplaces) in the human soul. 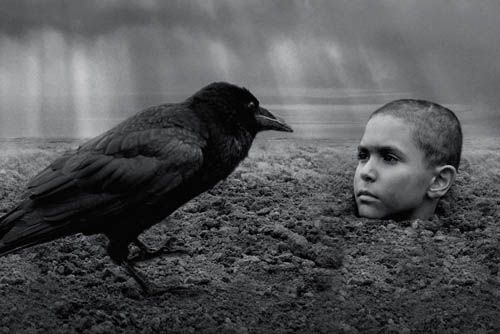 I am severely messed up by the film, but I am also alive. In confronting the horrors in it, I have my mind trying to work out what this means and how to see the light in existence. I am connecting to world in unexpected ways.

The easiest way of describing the film is imagine the classic COME AND SEE but in Black and White as if shot by a young Tarkovsky or Bela Tarr but much more poetic and dark. This is a blood brother to the earlier film that hammers home some of the same themes while expounding on a whole slew of new ones.

I am filled with an awe of the film in the way that few films manage to engender.

While I was not quite in like with the film in the early portion, once events begin to be set in motion and our hero hits the road I had fallen completely under it’s spell and I spent three hours spell bound staring at the screen wondering where this was all going.

This is a staggering work that demands to be seen.

Somewhere I think I should say a couple of random things

The only thing that is really wrong with the film is the dubbing of some of the actors is odd.

And while the film is supposed to be based on Jerzy Kozinski's autobiographical novel I doubt that this happened to him. While I suspect some of the events are real- I highly doubt they even remotely happened like this
Posted by Steve Kopian at July 13, 2020