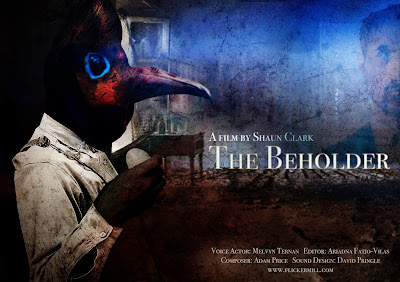 One of my favorite directors Shaun Clark entered a 15 second film contest and ended up with extra footage. He put it together into THE BEHOLDER a roughly minute and a half long retelling of Edgar Allan Poe's Tell Tale Heart and the result is glorious.

Okay so Shaun isn't 100% faithful to the letter of  Poe, but who could be in under 2 minutes? What Shaun has done is to get the spirit right. He has made a film that makes us feel the story which is much more important. It is Shaun's ability to take a story and compress it down and keep the heart of it that makes him such a kick ass filmmaker. He has an ability to lazer focus on the importan things and get them across perfectly. As I said about his earlier masterpiece NECK AND NECK I never fully understood  Shakespeare's Othello until I saw his film.

And of course what makes Shaun's so powerful is his use of image. He stylizes things so the reactins are heightened. From the use black and red images in NECK AND NECK to the almost realistic images here in THE BEHOLDER Shaun crafts images that are just as key to what we are seeing as the sound and the plotting.

I freaking love this film. It is short and sweet and left me smiling and shouting "YES!" before watching it again

Look for the film to hit lots of upcoming festivals. 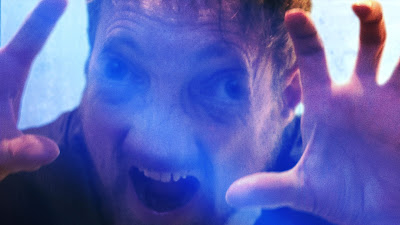