Talking to Linhan Zhang about LAST FERRY FROM GRASS ISLAND 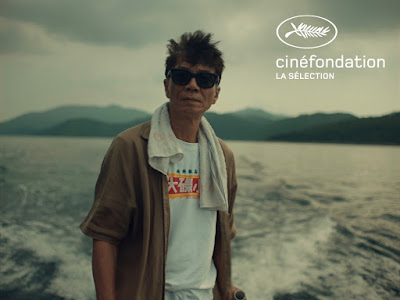 I originally saw Linhan Zhang's LAST FERRY FROM GRASS ISLAND  just before Tribeca and I instantly had to interview him. Here was a calling card of a great director and I had to speak to him before his next film makes him an unreachable superstar. (Trust me this is going to happen)

Because of circumstance it was decided to do the interview via email.  I sent off a number of questions and waited for the answers to come back. More circumstances intervened and the answers arrived so it  should have been an interview retimed to the Cannes market, but things exploded in my world and it got delayed.

What follows is my interview with Linhan Zhang, a director who blew me out of the water. As I said in my review he is going to do great things (If you want to read my review go here). The film is currently on the festival circuit and is highly recommended.

STEVE: The first thing you notice about the film is its aspect ratio. Why did you decide to shoot in the "academy" ratio?

LINHAN ZHANG: The use of 4:3 fits the rustic, old school look of the island. And because most of the scenes happen inside the cramped house, having a wide aspect ratio would result in a lot of wasted space.


STEVE: Your cinematographer Giorgos Valsamis's work is a huge part of why the film works as well as it does. Where did you meet? How much input did he have in what he shot? Mst importantly will you work with him again?

LINHAN: I met Giorgos through my director friend Vasilis Kekatos back when we were Sundance Fellows in 2017. Last year they made a short film The Distance Between Us and the Sky which won Palme D’or at Cannes. Giorgos found Hong Kong’s archipelagos similar to the islands of Greece but they have very different cultures. He can notice things on the island that I take for granted. In a parallel way, our collaboration is based on fusing our filmmaking styles together.


STEVE: The film is told largely in a series of long wide or medium shots. I think the only close ups are in the sequence where the master puts his mother to bed. How important was it not to use a lot of close ups and lots of shots?

LINHAN: I used wide shots so the audience can see the ensemble of the characters, which can add depth to the story. The close up shot between the Hitman and Mother was a homage to the hand shot in Carlos Reygadas’s Post Tenebras Lux. This is the only time where we see a display of affection, other times we see personal relationships wrapped in a layer of self-defence and hitman’s professionalism.


STEVE: For a story that is potentially very violent, there is a sweetness and a humanity to it all. any nastiness is kept entirely off screen. Did you have to fight to keep it that way or did your producer want something different?

LINHAN: I am a fan of Hong Kong hitman films. This genre has been explored by many great directors like Johnnie To and John Woo that it is difficult for me push the boundaries. Instead of trying to choreograph an even cooler action sequence, I decided to not have it at all. I think the viewers have enough action sequences in their head to imagine something. My producer didn’t object – he was very happy that it wasn’t going to be messy.


STEVE: I've spoke with numerous directors about the difficulty of casting a short and a low budget film, especially the dangers of ending up with uneven performances. The cast here is note perfect. How did you put such a perfect cast together?

LINHAN: I was just very lucky – I didn’t do casting calls. I showed the scripts to my producers and fellow filmmakers and they referred me to the actors you saw on screen.

My producer connected me with lead actor Tai Bo was a founding member of the original 1976 Jackie Chan Stunt Team. He’s been making Hong Kong style action films for a long time. He agreed to work on this short because it presents a vastly different take on the traditional action films.

Our actress Wang Yang was referred to me by an NYU graduate filmmaker Layla Jian Luo, who casted her in a great short film called What Do You Know About the Water and the Moon.


STEVE: Why did you use a pug and is it your dog?

LINHAN:The pug belonged to the owner of the house that we shot. She was very cute and we just decided to let her have a role. It made the story a lot more light-hearted.


STEVE: What is you connection to Grass Island?

LINHAN: I haven’t discovered Grass Island until I started researching Hong Kong islands in general. As one of Asia’s cultural melting pots, Hong Kong has a rich history. But we often focus only on its urban environment and seldom explore what is outside of Hong Kong Island and Kowloon. I wanted to preserve the less remembered pieces of the city, and that includes the 250 or so outlying islands.


STEVE: You've made a film about assassins, and since we tend to create things based on what we know i have to ask are you an assassin and if so will you get in trouble for telling this story?


STEVE: You shot the film in Hong Kong during the current turmoil. How did the protests and crack downs effect your shoot?

LINHAN: There was always a sense of uneasiness in between production hours as we follow diligently on the latest news. However, we were fortunate to be shooting on a small island far away from the city. There were no disturbances from anyone. The production was smooth.


STEVE: with all that is going on in the city now, is it likely that you will be able to shoot there again?

LINHAN: I think so. But now we have a pandemic.


STEVE: While I think the film is pretty much perfect, the life on screen bleed off it both at the start and at the ending. Was this designed as a stand alone short or was this a proof of concept for a feature film?

LINHAN: Perhaps there are more backstories about these characters that can be explored into a feature. But because of the exploitations of the Hong Kong hitman genre, I’m happy to stop here. Maybe this can serve as a thematic extention to all the hitmen characters in those 90s movies, and what they are doing 30 years later.


STEVE: One of the things that I love abut the film is that you can see see that you were influenced by filmmakers before you - but at the same time you never borrow whole cloth but instead you refashion everything into your own vision. For example I was watching the film again to prepare for this interview while at lunch and a friend who is a big movie fan was sitting next to me. When it was done he was floored by it like I am, and he said it reminded him of a film Johnny To might do, but at the same time it was very much not a To film. That's a roundabout way of asking, who are your favorite filmmakers and what are some of your favorite films?

LINHAN: As a collective I like the emerging Greek cinema. Especially for their deadpan comedy and absurdity. Individually I am a fan of Wong Kar-wai and Paolo Sorrentino.


STEVE:  Who are your favorite performers and who would you most want to work with?

LINHAN: For reasons above, Tony Leung and Toni Servillo.


STEVE:  What is next for you?

LINHAN: Think about my next project and waiting for society to go back to normal.
Posted by Steve Kopian at July 15, 2020