Brief thoughts on THE TOBACCONIST which is now in virtual theaters 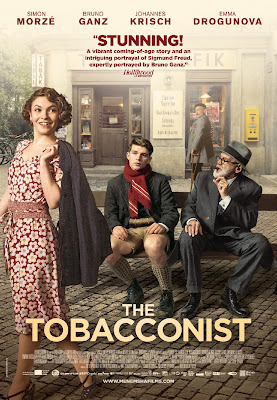 A young man moves to Vienna to work in the tobacco shop of a friend of his mother's where he gets romantic advice from Sigmund Freud. Unfortunately this is the 1930's and the Nazi's are on the march.

Based on the novel by Robert Seethaler THE TOBACCONIST is on odd mix of coming of age and historical dramas. The mix doesn't always get it right, sometimes it's a bit too light and at others a bit too pointed with the result that while I really liked the film I never quite fell in love with it the way I felt I should have. I wanted a tad more meat...however that said, I really want to sit down and watch it again and take it for what it is, a solid drama.

Actually the real reason I want to see the film again is the stunning award performance by Bruno Ganz. In a career that spanned decades and is full of dozens of iconic roles, Ganz's Sigmund Freud is something truly special.  Disappearing into the role behind glasses and beard, Ganz creates a character we'd all like to hang out with. To be certain it is almost formulaic in the wise old elder who teaches the youngsters about life way, but Ganz never lets it fully slip into cliche, instead giving us a character who is always real and extremely human. If there is justice Ganz will end up in the Oscar mix when ever Covid allows the awards to happen.

A small gem of a film THE TOBACCONIST is recommended and can found on Kino Marquee.
Posted by Steve Kopian at July 12, 2020