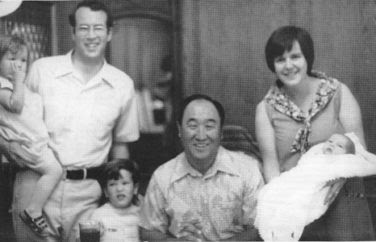 Blessed Child is wonderfully unexpected. A look at director Cara Jones' life particularly her relationship with the Unification Church where her parents are big mucky mucks, what I thought was going to be a blistering expose on the church and it’s cult like status turned out to be thoughtful portrait  of Jones‘s family and how the church and her eventual splitting with with it shaped everyone's lives.

I was kind of blindsided by the film. It's my own fault I went in with all sorts of preconceived notions that were based on nothing. I had a picture of what the film was going in  so I was looking at the film kind of sideways for much of the first half of the film. I kept waiting for the film to be what I thought it was going to be (a sensationalistic expose). Then I had an "AH HA!" moment and the film fell together and I could see it for what it is, a really good look at family and religion.

While the film deals with all sorts of issues and themes what I really liked about the film is how the film explores our expectations. Jones opens herself up to us in discussing the waves of feelings and thoughts she had about the Church and her move away from it.  She was uncertain how leaving the church, which is huge part of her life and that of her family thanks to her parents status, was going to play out. Would this break the family?  She is surprised by how it all goes.

And so are we which is what makes this film so interesting and oddly delightful because we, like Jones find out that this is not a tale about the Unification Church but about a family and it's shifting dynamic. It is a dynamic that makes this a much more universal tale than it had any right to be.

Available July 17 on iTunes, Amazon and Google
Posted by Steve Kopian at July 14, 2020