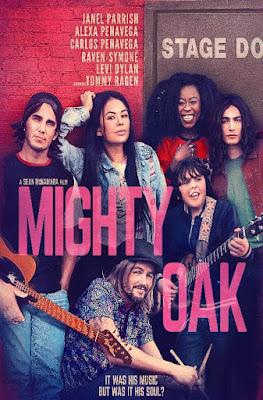 MIGHTY OAK vexes me. It is a film with an awesome cast, great music, beautiful filmmaking craft (outside of a bad car crash) and a script that makes you wonder what drugs they were on. Give Sean McNamara points for kind of pulling off the impossible and making a film that shouldn't work compelling, but at the same time screenwriter Matt Allen needs to be sent somewhere dank and dark and never allowed to return.

When Gina Jackson's brother is killed in a car crash she thinks her life is over. They were heading with their band to a gig that was going to make their careers when a drunk driver switched lanes and hit them head on killing Gina's brother. Ten years on Gina is looking for cash and wants her brother's guitar back. She discovers it in the hands of a ten year old named Oak who plays just like her brother. Could he be her brother reincarnated? Can she get the band back together and lead them to glory?

Okay- if you aren't picky and you can just go with it, MIGHTY OAK is an amusing film that kind of works. Its the sort of film had me getting teary in the end despite knowing what was going to happen and having tons and tons of issues with what went before.

The problems with the plot are many. A lot of this doesn't make sense, timeframes are wrong, there are way too many plot threads, The film shifts focus seemingly at random. Much of this you have to accept because the film asks us to, I mean if you were in an exploding rock band that ended abruptly, would you just go along if someone suggested that a ten year old was going to take over the lead? Worst of all a lot of the characters are grossly under developed. For example Oak's mom is cypher. While we are allowed to think she is a drug addict, it's not until a too late in the game revelation are we clued in that she actually has Lupus.

I was talking to the screen through much of the running time wanting to know why these choices had been made. Of course I didn't get an answer, but I still asked why.

And at the same time I couldn't stop watching. I had to see how it was going to come out, more so when somewhere in the second half the get the band back together plot gets pushed aside for the question of what Gina is doing and what she wants best for oak even after his mother dies. Say what you will about the script the cast sells this film big time.

Is MIGHTY OAK worth seeing? Maybe. The cast is great, the songs are good and while the script is honestly and truly a WTF were they thinking  affair (and I left out some big WHAT!?! moments) it swerves enough in the second half that you probably won't get very turn way ahead of the characters. It is not typical Hollywood and that does count for something.

MIGHTY OAK hits VOD in July 7th and if you feel the urge give it a shot.
Posted by Steve Kopian at July 06, 2020