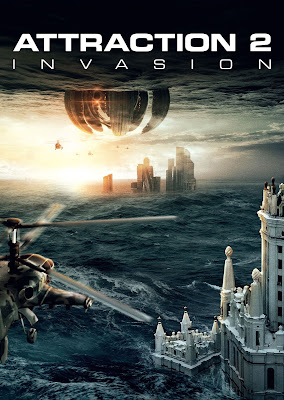 Sequel to the surprise worldwide hit ATTRACTION about an alien ship that crashes in Moscow and the love story that results between an earth girl and an alien, is less a romance and more an action thriller.

Picking up three years after the first film this film follows Yulia (Julia) the earth girl saved from death by an alien at the end of the first film.No longer fully human she is being politely studied by scientists as they also try to unlock the technology left behind. The scientists and military are trying to find an edge in case the aliens ever return. The trouble is they never left and they are monitoring earth and starting to think we are now a threat. Mayhem ensues.

Where the first film was a small romance blown up to literal IMAX proportions (a lot of it was a character drama spread across the huge frame with not so much action) ATTRACTION 2 is a big scale action film. The screen is full of things to look at and spectacular set pieces to take your breath away. From a pure action standpoint the film delivers nicely.

While much better than the first film, I actually want to see this again, ATTRACTION 2 it still has problems. Plotwise this film is messy. You really need to have seen the first film to know what the hell is going on and who the players are. Yea, after a while you can figure it out but this film plays things emotionally in such a way that you need to know what went before to feel the impact.

The biggest problem is that this is kind of two films mashed together there is the whole Yulia arc and all that is going on with her, and then there is the military/government response to the aliens. The Julia arc moves along at a good clip (much of the action is centered here), but some of the governmental stuff is static as people talk in rooms. It moves the plot through words rather than action, which would be fine if the first and third acts weren't so action packed.

Then again, as much as I am bitching about plot problems I am really happy that the problems arise from not only giving us too much to chew on but also a bunch of characters that after two films actually move us. We really feel their pain which is something you can't say about something like the FAST AND THE FURIOUS or other American blockbuster films.

If you like big action or love science fiction this is definitely worth a shot- though so try and see the first film before you do.
Posted by Steve Kopian at July 18, 2020