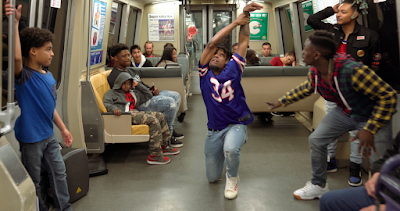 Scheduled to play the Cinequest Film Festival TURF NATION is a short and sweet little film about a group of young men who travel the BART system and earn money by dancing on the trains. The guys actually have worked outside of the trains (working with H.E.R, G-Eazy, Kehlani, Jack Harlow, E-40 and others) however this is how they make steady money.

If you've ever been on a subway in any city and seen buskers or dancers some into perform between stops this film will give you a better idea of what life is like for the performers. I was intrigued from start to finish because this as the first time I had any idea what it takes to hustle like this.

I really liked this film a great deal. I liked it so much in fact that the only real complaint I have is that the film should have been a feature so we can really get to know the dancers better.

The film played the Big Sky Documentary Film Festival and will play the Cinequest Film Festival  August 16 to 30.
Posted by Steve Kopian at July 26, 2020