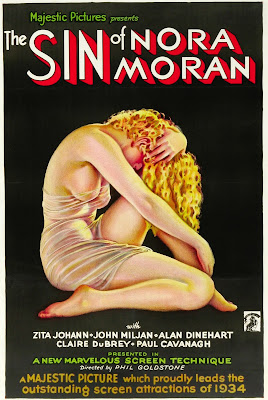 The independent THE SIN OF NORA MORAN is getting a release on Blu-Ray that will hopefully get many more eyes on this complex film that has confounded audiences for decades.

A failure when first released to theaters in 1933, the film has remained in the public consciousness thanks to the iconic poster by Alberto Vargas (a random person buying the Blu-Ray is going to win a framed print of the poster). Most people I know haven't seen the film but they damn sure have seen the poster.

The film is the tragic story of Nora Moran who suffers through tragedy after tragedy until she ends up taking the rap for her lover. Refusing to name names to save her life she heads toward to death chamber while her fate is pondered by various people connected to her story.

One of the most adult film that Hollywood produced in the early days of sound, this is a film that has some decidedly modern takes on rape, infidelity and the power of men over women. It's a film that doesn't pull it's punches with the result that the soapy tale has a real punch. It also results in a film that modern audiences who know film history will be puzzled by since it would be at least another three decades before the subjects were covered as frankly as they are in this film.

What doomed the film is the fact that director and Phil Goldstone and his crew restructured the story into a series of flashbacks and flashbacks within flashbacks. Apparently it wasn't done out of artistic desire but a budgetary need to just get the film done. It was a brilliant move but it left audiences confused. No film had ever really attempted anything like this. The film wasn't really interested in just telling the story from start to finish but rather it was interested in forcing the audience on  an emotional and psychological journey. Audiences had no idea how to react since the story is very far from being a straight narrative. People didn't know how to react, since they didn't know how to work with a film this completely.

As much as I admire the film, and as much as I think you need to see this film, I still don't absolutely love the film. First, and this is my own prejudice, I hate films that are this tragic. I hate that we are essentially waiting for the pain to end with the death of  our heroine. I hate these sort of films. (But that is my own problem). The other problem is the film for all its complexity is this is very soapy. The soap comes in the highly accentuated moments of emotion, particularly in the final moments. While its understandable considering when the film was made it, it is the only thing in the film that hasn't aged well

Minor quibbles aside, this film is a must, more so in the glorious restoration that hit Blu-Ray and DVD tomorrow.

SPECIAL FEATURES: Narrated by film historian and producer Samuel M. Sherman, an original documentary where Zita Johann’s illustrious career takes center stage from Daniel Griffith at Ballyhoo Motion Pictures; the Blu-ray includes English subtitles and the DVD closed captioning for the hearing impaired; and (Blu-ray edition only) an exclusive collector's booklet with commentary on the production of and response to the film.
Posted by Steve Kopian at July 28, 2020