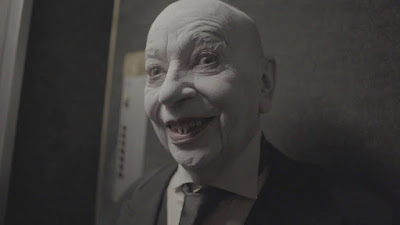 Portrait of dancer, performer, storyteller and director, Lindsay Kemp. It is told through a series of interviews and clips of his performances.

Not having any real idea who Lindsay Kemp was before going in, I feel as though I have a slightly better idea coming out. Mostly there were some "AH HA" moments as I realized I had seen some bit of some performance he and his troupe had done. I genuinely knew of him and his work despite not knowing who he was.

At the same time I still feel awash in a way that you get when you talk to some one who interests you and they simply tell you too much about themselves but never completely link up all the parts of their life. Kemp's life is all there with one story leading into something else with a reference to another thing. Much of this is truly fascinating, some of the individual stories and bits are wonderful, but not really Kemp  I frequently felt lost as a whole. I liked the pieces more than the whole (I mean the Dracula opening is magnificent)

For information on how to watch go here
Posted by Steve Kopian at July 16, 2020