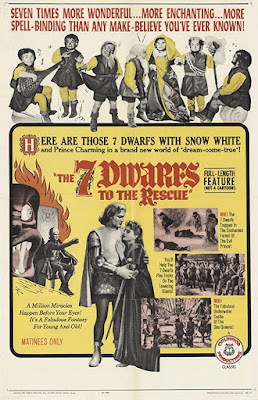 After Snow White and Prince Charming are married, the Prince must put down a rebellion led by a duke. However, Snow White is tricked into believing that Charming has been captured. When she tries to free him, she's captured by the Prince of Darkness. The Seven Dwarfs are then forced to go and rescue her.

One review of this film said that the New Orleans Bad Film Festival shows the film every five years, because they claim the film's so bad the audience won't sit for it. It's not that bad. While decidedly not good, it isn't really bad, certainly not in any sort of legendary way. It's actually very much like any number of the other fairy tale films produced in Europe at the same time. I'm guessing that this film, like many other similar films, is actually merely badly dubbed. As several reviews said, this film is only bad to people who really don't know bad films. 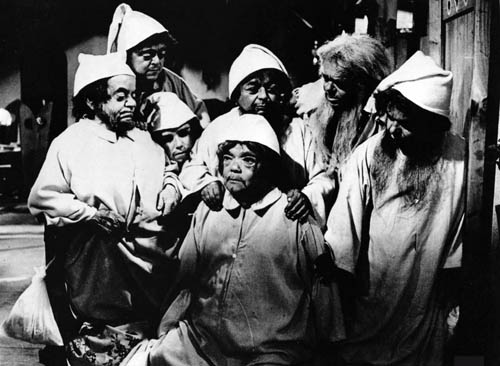 Like most of the dairy tale films of the time this film takes what most of us think of as a classic fairy tale and puts a spins into the stories we were told as children. It's weird and wonderful, set in a place similar to our own (yet different). It's a really wild head space to be in that all sorts of weird things happen and it takes odd turns, like topless-looking water nymphs kidnapping the dwarfs from the middle of a field. Truly trippy, — this is a film is its own beast.

While decidedly not for all tastes, this film is a must see for anyone who loves weird and wacky films. It's a one of a kind viewing experience and not to be missed.
Posted by Steve Kopian at July 12, 2020