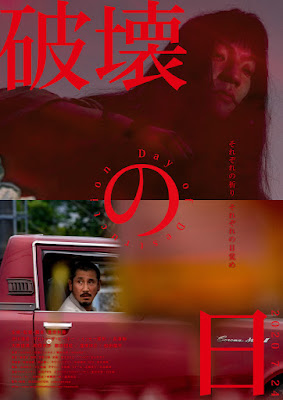 A last minute addition to Japan Cuts Toshiaki Toyoda's THE DAY OF DESTRUCTION just suddenly appeared on the film website just as it was announced on social media.It was only going to be available for 24 hours to coincide with the release of th film in Japan. I only found out about it because Mondocurry emailed me to let me know it had dropped- and since no screener was available that I know of I plunked down my 7 dollars and gave it a go.

Beginning seven years ago a giant living blob appeared in the bottom of a mine. After that a plague  seemed to sweep through a small village. A young holy man tries to combat the forces of evil he believes are invading the world.


Made to coincide with the opening of the 2020 Olympics the film is Toyoda's “exorcise a society obsessed with the monstrosity of self-interest and greed.” Its a film that is clearly close to Toyoda with his passion and need to change the world for the better bleeding off the screen.

The film instantly gets into trouble in the opening sequence set seven years ago.  A reporter goes to a mine to see the blob at the bottom and he then proceeds to walk down the tunnel for the better part of ten minutes. Yes there is some changes in the sound track but it is simply someone walking for ten minutes. He then sees the creature turns around and leaves. This wouldn't really be a problem if it lead to something but it just kind of hangs there.  Granted it's a mood builder, but at the same time it devours one fifth of the films running time. It is echoed by the long cryptic crosswalk sequence that ends the film.

From there the film spins out in a series of sequences that talk about epidemics and mysticism as people try to sort out what is going on and why people are behaving strangely. While I can and do admire the pieces I'm not sure they all hang together.  I think this is a film that is very much trying to make a point and it is using the conventions of horror films and thrillers to do so, except that the need to be about something is subverting the creation of any scares and chills. It's almost as if Toyoda was obligated to turn in 50 minute plus end credit run time and found it was too long for  what he had in mind (say a chilling 25 minute short) and as a result he filled the extra time by explaining a little too much. I kind of wish this was a more tightly cut, more cryptic short or a full on feature where Toyoda explored things more fully.

An interesting miss that is neither fish no fowl, THE DAY OF DESTRUCTION is more a doodle from a talented director rather than a full on work of art.
Posted by Steve Kopian at July 25, 2020