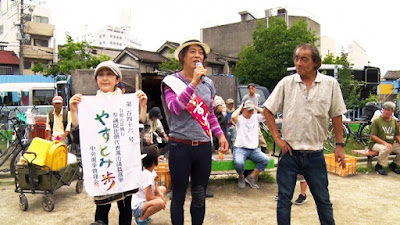 Kazuo Hara's epic four hour and ten minute film is highly recommended for political junkies and those who want to disappear into and true life epic tale. Contacted by transgender Tokyo University professor Ayumi Yasutomi who is going to run for public office, if Hara will make a film about it, Hara turns his camera onto the whole slate of the Reiwa Shinsengumi (“new squad”) party which was formed mere months before the election was to be held. The politicians are not your typical Japanese candidates and what they proposing runs counter to the ruling party which has been in power for over  6 decades.

If you've seen Hara's earlier films such as Sennan Asbestos Disaster or the Emperor's Naked Army Marches On you'll have an idea what to expect. Hara is going to drop you into the thick of things and make you see what he is showing you. For some it's too much for other's just right.  My personal opinion toward the film, like some of his earlier films, is that there are moments where I pondered if we needed to see certain things, until we get to the end and I realize, yea we did.

When I saw that this film was playing at Japan Cuts I got excited because I knew I was not going to be seeing anything like a typical documentary, instead I was going to see something that really made me engage with a subject.  I was not disappointed.

I know this film is not going to play well with everyone, but for those who want a full bodied, thoughtful film that has great emotion and humor in it I highly recommend Reiwa Uprising.

For information on how to screen Reiwa Uprising (or any other film) at Japan Cuts go here. (Warning it is only available if you are in the US)
Posted by Steve Kopian at July 18, 2020