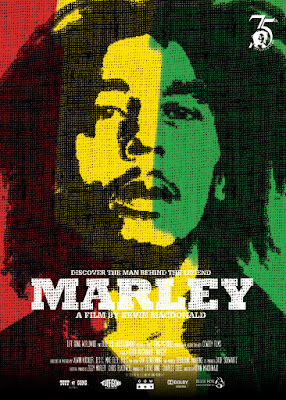 This is going to be short and sweet but if you've never seen Kevin Macdonald's documentary MARLEY about the late great Bob Marley you now can correct that wrong with the film hitting virtual and real theaters in honor of Marley's 75th birthday.

Macdonald's film is a staggering achievement. Running almost two and a half hours this is everything you ever wanted to know about the man, his music and his influence. Macdonald talks to everyone and through it all he weaves in interviews with the man himself  so that we get to hear about things from every perspective.

And of course there is the music. Filling the film from start to finish is not only Marley's music but also the music that influenced him. Its magical. It's so magical that I agreed to take yet another look at the film just so I could have an excuse to just sit and listen to the music.

I can't recommend this film enough. If you love Bob Marley's music and have never seen this film you must. If you don't know Marley and his music then you must see this because it will open your eyes as to how he changed the world.

MARLEY is in virtual theaters starting today and in select theaters and drive ins as well.
Posted by Steve Kopian at July 31, 2020