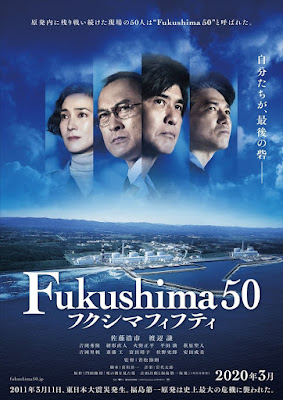 Setsurô Wakamatsu's FUKUSHIMA 50's  first ten minutes is as nerve jangling as anything you will see all year. Depicting the massive earthquake and following tsunami that took out the Fukushima nuclear reactor it will make you want crawl under your chair and hide. It's not that it's graphic, rather it makes real one of the very worst nuclear disasters in history.

After the killer opening the film settle down to tell the story of the men and women who fought to keep the reactors from gong completely out of control. It's a tense tale of people facing oblivion and the choices they are forced to make. Indeed one of major plot point is whether to follow orders and stop cooling the reactors or to keep going because it's the only way to even remotely save the world. It's a ride that will force you to do a lot of thinking.

Wakamatsu's film is interesting in that it is kind of more straight reporting of events rather than a film filled with who is to blame. This is the story of what happened and while the distance of time would make you think that some blame throwing would be in order, Wakamatsu takes the stance that these are people just trying to survive so that what they are doing is not black and white of hindsight but the grey of living in the moment. That may not sit well with those looking for heroes and villains, but life isn't always clearcut.

I should point out that in telling the tale Wakamatsu has changed the name of everyone other that Ken Wantanbe's Masao Yoshida. That is not a flaw in the film, rather an acknowledgement that there were too many people responsible for stopping the nightmare to name them all. Yoshida on the other hand was the guy everyone new and he was the one who made many of the fateful decisions carried out by his teams.

I absolutely loved this film a great deal.

Highly recommended, FUKUSHIMA 50 plays at the virtual Japan Cuts starting Friday and playing until July 30. (Tickets here)  One piece of advice the film can only be accessed if you are in the US.
Additionally there will be a video introduction by the stars. And on July 27th there will be an award presentation. (The introduction and awards ceremony are free)
Posted by Steve Kopian at July 15, 2020