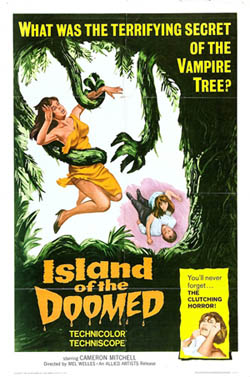 A bunch of tourists take a trip to a largely deserted island. No one lives there except a lone baron (Cameron Mitchell). As they're driving down a deserted road, a man staggers out in front of them. Something was obviously wrong with him before he expired. They're rattled but press on. They finally meet the baron who takes them in. Of course, all is not well — the Baron is a mad horticulturalist and is keeping a garden full of carnivorous plants.

ISLAND OF THE DOOMED (aka Maneater of Hydra and The Blood Suckers) should have been made a decade or two earlier. This tale of a mad scientist and his experiments is way too campy coming out the 1960s and in bright colors. This should have been dark and shadowy, with Lionel Atwill in the lead. Seeing it recently in the stunning version that Sinister Cinema put out has me pondering what I think of the film. For years, I had watched it via faded grainy and choppy prints, and my feelings were tied to the fact it looked like a misunderstood schlock classic. Seeing it pristine makes me think differently. This isn’t to say the film is bad: it’s not, more that as it stands now, it’s good in a bad sort of way.

Is it worth seeing? If you love good bad movies or if, like me, you're a sucker for crazy monster films — it is.
Posted by Steve Kopian at July 09, 2020