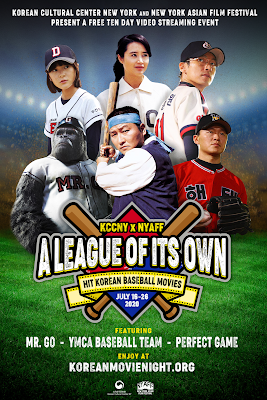 2020 is proving a banner year for Korea: Bong Joon-ho’s Parasite made Oscar history; the nation’s widely praised response to the Coronavirus epidemic made headlines, and now Korean Baseball goes live on ESPN... finally! This is the perfect time for an event that pairs two blockbuster sectors of the entertainment business at which the country excels: Baseball and Cinema. Korean Cultural Center New York (KCCNY) and the New York Asian Film Festival (NYAFF) team up to present a free streaming series that highlights Korea’s glorious sports history, pitching legends, and the peninsula’s favorite baseball teams through a selection of three major films of the genre from July 16 to 26. Whether you’re a KBO League fan or a Korean cinema lover, this exclusive online event offers the thrills that you’ve been craving after months of quarantine..

THE KOREAN BASEBALL SERIES - Streaming details:
Free and unlimited run of the films for 10 days
July 16 - 26, 2020 at koreanmovienight.org

FULL LINEUP:
MR. GO ( Kim Yong-hwa, 2013, South Korea, 133m )
Cast: Sung Dong-il, Jiao Xu, Kim Hee-won, Kim Kang-woo
Language: Korean with English Subtitles
Synopsis: From the director of Along with the Gods and 200 Pounds Beauty, massive baseball blockbuster movie Mr. Go follows this insane premise: what if… a Chinese circus-trained gorilla joined a major Korean baseball league? In other words, it's the perfect film for a world gone bananas. At turns unexpectedly realistic and laugh-out-loud hilarious, this warm tale of a debt-ridden Chinese kid and her bat-swinging, show-stealing primate friend, brings jaw-dropping action and plenty of emotion to the screen. Facing tragic circumstances and a rather nasty loan shark, the unlikely pair is forced to relocate to Seoul, where they end up leading the Doosan Bears to a prodigious winning streak. That is, until a second ape shows up in the game! And it’s not just about the grand spectacle of CGI-crafted gorillas going apesh*t on each other, the film also prominently features the teams and fields of the KBO, including the brief cameos of MLB superstars Ryu Hyun-jin and Choo Shin-soo.

PERFECT GAME ( Park Hee-gon, 2011, South Korea, 127m )
Cast: Cho Seung-woo, Yang Dong-geun, Don Lee (Ma Dong-seok)
Language: Korean with English Subtitles
Synopsis: This stirring drama is based on a legendary real life game that rocked Korea in the 1980s. As the country struggled towards democracy in a time of unrest, baseball mania took the public by storm. Fans across the nation were enthralled by the rise of two titan pitchers: Choi Dong-won (Cho Seung-woo), the ace of the Lotte Giants, and Sun Dong-yeol (Yang Dong-geun), the rising star of the Haitai Tigers (now the Kia Tigers). Regional allegiances put their once friendly rivalry to the ultimate test as tensions mount and the stakes are raised to feverish heights.

YMCA BASEBALL TEAM ( Kim Hyun-seok, 2002, South Korea,104m )
Cast: Song Kang-ho, Kim Hye-soo, Kim Joo-hyuk, Hwang Jung-min
Language: Korean with English Subtitles
Synopsis: Like many of the best Korean films, YMCA Baseball Team blends and bends genre, defying easy categorization and labeling: a landmark of the sport movie genre and a comedy that effortlessly blends the slapstick, the social critique and the cleverly quirky; it also revisits early colonial history and turns the spotlight on the true story of the first Korean baseball team. In this tale of rivalry and resistance to colonial oppression, a scholar-gentleman’s son refuses to follow the path his father has set for him and devotes himself to the foreign sport. Awkward team-building (in class-ridden early 20th century Korea), friendships and maybe a touch of romance await as the rookie Korean sluggers and pitchers prepare for the ultimate game against the Japanese military team. Oh, and it’s also the occasion to appreciate the finest of the finest Korean actors and see what they were like 18 years ago... Song Kang-ho, Hwang Jung-min, Kim Hye-soo and the late Kim Joo-hyuk lead the team: A different league indeed.

ADDITIONAL NOTES:
Introduced to Korea in the late 19th century by American missionaries, baseball became a national Korean obsession and a fan culture of its own. By the 1920s, as the Major Leagues were touring Asia, Koreans seized the opportunity to assemble a team and proudly pit themselves against the country that created the sport. As baseball fever swept over Korea, many cities decided to create their own teams; South Korea was finally able to officialize their baseball league in the 1980s and named it the Korean Baseball Championship (later renamed KBO).

KBO discovered many new talents, and Chan Ho Park made history when he became the first Korean player to join a Major League Baseball team (the Los Angeles Dodgers) in 1994. It’s no wonder then that other avenues of South Korean pop culture, such as film, were inspired to create a number of historical and fictional stories about the sport. Not only will these films stir interest in Korean baseball history and culture, they will also allow audiences outside Korea to experience its spirit and excitement.
Series concept by NYAFF’s Event Production Senior Manager and Doosan Bears super fan, Patrick Nance.

Enjoy these films for free at koreanmovienight.org!
Posted by Steve Kopian at July 13, 2020